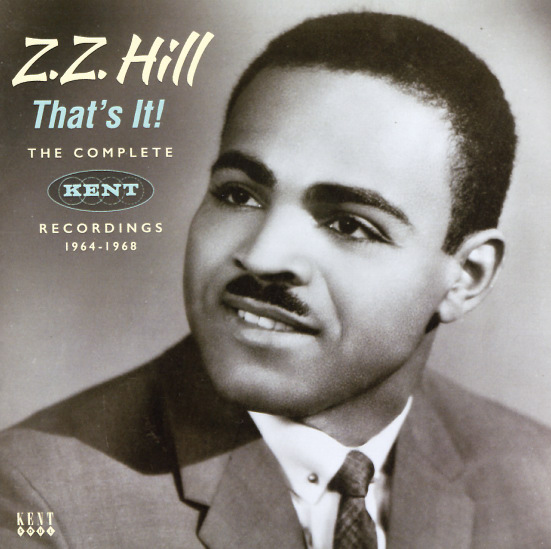 A few reviews back we explored an Ace/Kent album that spotlighted southern soul man, George Jackson. Now the same label offers an insight into the career of another southern soulster who enjoys the same kind of status as George Jackson. You see, like George, Texas’ ZZ Hill is almost anonymous to the mainstream, but just like Jackson, Hill’s oeuvre is revered by knowing collectors and they will be delighted with this new 2CD, 49 track collection that rounds up everything he recorded for Modern/Kent between 1964 and 1968.

Born Arzell Hill in 1935, ZZ’s first musical forays were in the church but mentored by his brother Matt, he eventually signed a deal with Kent/Modern . There he recorded a slew of singles and one great album, ‘A Whole Lot Of Soul’. Neither the singles nor the long player were particularly successful but as the collection proves, lack of success doesn’t mean lack of quality. Hill’s work at Kent/Modern is right up there with the best of southern soul – a tad bluesier, yes (Hill’s roots were in Texas, after all) but still mighty soulful and always authentic.

This collection’s first CD offers all of Hill’s Kent singles and across the 27 tracks there’s so much quality that it’s impossible to cherry pick. Sound wise, the music is typically Texas soul blues much in the manner of Bobby Bland, though, oddly maybe, you can also hear traces of Joe Tex. Some of the cuts are a little more polished, a little more uptown- notably ‘No More Doggin”, ‘Set Your Sights Higher’ and the pastiche of Fontella Bass and Bobby McClure’s ‘Don’t Mess Up a Good Thing’ that is ‘Gimme Gimme’. The gloss on these tracks is probably down to producer Marc Gordon (later owner of Soul City Records) who at that time, as well as working for Kent/Modern, was also representing Motown on the West Coast and it’s probable that some of the Motown ways were rubbing off on him even then. All the tracks on CD 1, by the way, are in mono.

The first half of the set’s second CD offers Hill’s 1967 album ‘A Whole Lot Of Soul’ – appearing for the first time on CD. The 12 tracks are in stereo and the repertoire consists of Hill’s covers of well-known soul hits like ‘When Something Is Wrong With My Baby’, ‘Knock On Wood’ and ‘Steal Away’. Interestingly there is a Bobby Bland cover – ‘You Gonna Make Me Cry’; the most intriguing cut, though, is the take on Bettye Swann’ ‘Make Me Yours’.

The remaining tracks on CD 2 (some previously unissued) are tracks that Kent/Modern owner Joe Bihari “doctored” after Hill had left his label. In the early 70s, working for his brother’s MHR label and Jerry Williams’ Mankind, ZZ started to achieve moderate success so, to cash in, the ever-hustling Bihari tried to improve old ZZ Hill material – adding strings and so on – to score hits of his own. Most interesting of these “new” tracks is ‘You Won’t Hurt No More’ – a blatant rip off of Brenda Holloway’s ‘Every Little Bit Hurts’. It’s quite lovely but it was never released – it seems Bihari got cold feet and sensed that the Motown plagiarism lawyers would have had a field day!