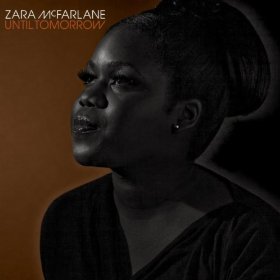 Zara McFarlane is a 28 year old London-based jazz vocalist, who’s already worked with an impressive list of artists – Denys Baptiste, Orphy Robinson, Soweto Kinch, Hugh Masekela and Alex Wilson amongst them. In 2010 she won knowing attention via her self-produced EP, ‘Until Tomorrow’ and was five tracks in to recording her first full solo album when Gilles Peterson heard her and signed her to his Brownswood label. That really tells the story. The taste-making jazz DJ – known for his championing of the unusual but excellent – heard something fresh and quite different in Zara’s music. Certainly her style and sound are in the modern jazz vocal tradition but listen and you’ll also hear nu/neo soul sensitivities too.

The track ‘Captured (part 3)’ captures the essence of her work. It combines the off-the-wall qualities of Erykah Badu and the storytelling of Jill Scott with the laid back style and swagger of say, Dianne Reeves – even Cassandra Wilson. There’s more of Ms Badu about ‘Blossom Time’. Neither are “easy” songs though; nothing here is. The songs demand concentration – none more than the opener, ‘More Than Mine’. There’s a quality of Amy Winhouse in parts of the vocal while the poignant piano (from Peter Edwards… very strong throughout the LP, by the way) works against the almost New Orleans marching band funerary brass work. Lightest moments come with ‘Mama Done’ and ‘Waking Sleep’. The former is almost a light Latin moment while the latter is the singer’s take on the lullaby.

You can find out more about this unique new singer @ www.facebook.com/zaramcfarlane