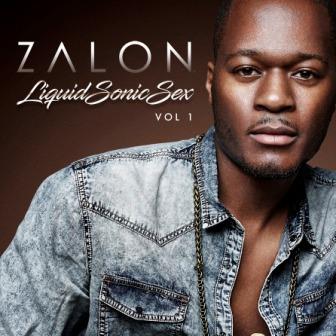 ‘Liquid Sonic Sex’ is the debut solo album from UK soul man Zalon (Thompson). The young Londoner, though, is no new kid on the block. Committed to music from an early age, he started his career as backing singer to US soul man Freddie Lee who worked the UK circuit with DJ Bigger. Soon a feature on the London soul scene, Zalon met Amy Winehouse who asked him to tour with her. What was to be a temporary gig lasted for three years and in between Winehouse commitments Zalon also found time to work with Dionne Broomfield… he’s the male voice on her version of ‘Ain’t No Mountain High Enough’.

Zalon was one of the first artists signed to Amy Winehouse’s ‘Lioness’ label and the duo set to work on an album with Mark Ronson. Then the tragedy that was Amy’s sad and unnecessary passing… Zalon was devastated personally and his project was left in limbo.

Years later, our man’s picked himself up… stronger and, I’m guessing, wiser, he’s got himself his own label and at last he has an album out on the sales racks… an album that’s pickling up discerning radio plays and plenty of positive reviews… and this particulae piece can be added to those already out there.

On ‘Liquid Sonic Sex’, Zalon lays his cards on the table right at the start with his opener. ‘Love (Interlude)’ is a great summation of what we could call the “Zalon sound”…. laid back and languid, more a vibe than a song, the vocals caresses the simple lyric in the way that people like Maxwell and D’Angelo have perfected. But the voice you’ll hear is neither of those Neo-Soul Gods, rather you’ll hear the influence of a certain Marvin Gaye…. and it’s MPG that you’ll hear right though this 14 tracker.

Highlights? Well like all of Gaye’s late career classics, it was never a question of highlights: rather his albums were singular bodies of work that demanded to be listened to from beginning to end. The same is true of ‘Liquid Sonic Sex’. If pushed, though, and to convince you of Zalon’s worth, I’d point you to the beautiful plaintive ballads that is ‘The Deeper I Go’ or the similarly layered ‘You Baby’… lovely, both.

If I were to make any criticism , it would be that there’s little change of pace… till the end – with the beatier ‘Erica’ and ‘Declaration Of Love’ which actually sound a wee bit odd given the nature of the album… odd, by the way, doesn’t mean, any dip in quality.

You will have noted that this album is tagged ‘Volume 1’, I look forward to the second instalment.