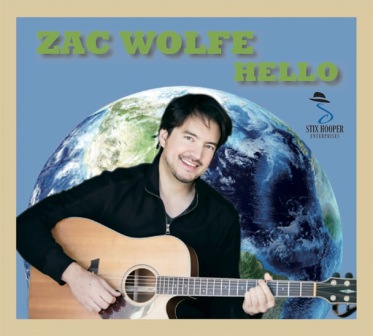 Oregon-born guitarist Zac Wolfe was discovered by sometime Crusader Stix Hooper and the drummer quickly signed him to his label resulting in this debut 11 tracker. Produced by Hooper, the music is a mix of smooth jazz, Latin, melodic pop and – in places – there’s a hint of Larry Carlton era Crusaders about proceedings.

That Crusaders feeling is most obvious on ‘Delusions Islands’ which features some classic drum fills from Hooper himself. Indeed, its Hooper’s distinctive presence behind the kit that brings the Crusaders feeling to many of the tracks while piano man Cassio Vianna does a great job at recalling the spirit of the late Joe Sample. What’s missing, of course, is the soulful sax of Wilton Felder.

Elsewhere the obvious comparison to make is with Earl Klugh. Like Klugh, Wolfe prefers the nylon strung, acoustic guitar which also explains the predominance of Latin-flavoured tunes, like ‘Samba Del Cielo’, ‘You Are Right’, ‘Lagimas De Um Soho’, ‘Churrasco Quente’ and a cover of the standard ‘Manha De Carnival’, which is given a respectful treatment.

The album’s title tune ( an original composition – not the Lionel Richie chestnut, by the way) is the most engaging track on offer. Boasting a sweet melody (reminiscent in places of Norah Jones’ ‘Don’t Know Why’), Earl Klugh himself would have been proud of crafting it.

Elsewhere, the most ambitious track jazz-wise is ‘Moonstride’ – but it’s still essentially jazz lite. That said there’s a faithful audience for the genre and members of that congregation can learn more @ www.stixhooper.com