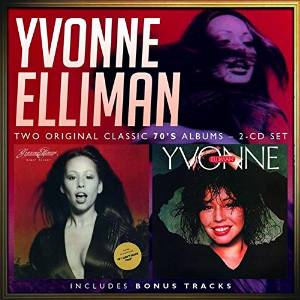 Hawaiian singer, Yvonne Elliman, rose to fame as Mary Magdalene in Andrew Lloyd Webber and Tim Rice’s rock opera, ‘Jesus Christ Superstar,’ in 1970. Not long afterwards she branched out into the world of recording by inking the first of several record deals but success proved elusive until she signed with Robert Stigwood’s fledgling RSO label in 1975. This Soul Music twofer combines her third and fourth albums for the label, 1978’s ‘Yvonne’ with the following year’s ‘Night Flight.’

By the time ‘Yvonne’ came out, Honolulu-born Elliman had already scored a UK Top 10 hit with 1976’s ‘Love Me,’ the title song from her third RSO LP. Two other hits followed from that album in ’77 and then in 1978, Elliman hit the mother lode when a song she recorded written by the Bee Gees and which appeared in the blockbuster disco movie, ‘Saturday Night Fever,’ took off big time. It was, of course, ‘If I Can’t Have You,’ a #4 UK hit and which as well as being available on the movie soundtrack album appeared on ‘Yvonne’ (as well as the shorter single version the longer ‘disco’ mix of ‘If I Can’t Have You’ is included here as a bonus track). It provides the stand-out moment on a solid 10-track album that also includes reggae excursions, soulful pop moments and singer-songwriter vignettes.

Undoubtedly buoyed by the success of Elliman’s appearance on the ‘Saturday Night Fever’ soundtrack, the follow-up LP, ‘Night Flight’ is a more danceable, disco-inflected effort, opening with the uptempo ‘Love Pains.’ Elliman proves she’s an expressive balladeer on Tom Snow’s mid-tempo ‘Cold Wind Across My Heart’ and Bernard Ighner’s classic ‘Everything Must Change’ (as recorded by Quincy Jones and Randy Crawford) which receives a sensitive, jazzy reading. There are some rock and pop elements too but the soulfulness of the set is underlined by Elliman’s  interpretations of  Thelma Jones’ ‘How Long,’ Ray Charles’s ‘Hit The Road Jack’ and Jimmy Holiday’s ‘I’m Gonna Use What I Got To Get What I Need.’