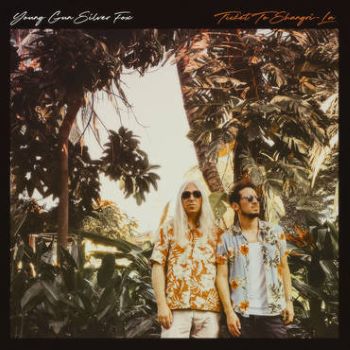 Over three albums YOUNG GUN SILVER FOX (Mamas Gun front man Andy Platts, the “young gun” and  eclectic performer/writer/producer Shawn Lee, the “silver fox… check out his pic!) have established a solid reputation as purveyors of a very special kind of sound… a smooth and sophisticated takes on blue-eyed soul with a garnish of West Coast harmony pop. Hard to pin down precisely, but maybe think a cocktail of Hall and Oates and  Steely Dan mixed with (from this side of the pond) bands like Prefab Spout!

The new ten tracker that is ‘Ticket To Shangri La’ is sure to cement the duo’s reputation and add numbers to their already extensive fan base. The album has been flagged up by three sweet singles, ‘West Side Jet’, ‘Winners’ and ‘Rolling Back’. All three were much-needed summery, sunshine vibes. Indeed they typified  the band’s sound… warm and vibrant, harmonic and hook-laden!

However, it being the duo’s forth album, the boys were minded to try something a little different. Shawn says: “We have a sound and language that we’ve cultivated that sounds like Young Gun Silver Fox and theses things are great… but nobody wants  to make the same thing over and over, so you need ways  to move forward. We have a lot of mid-tempo stuff, so I started thinking if we had some bangers and some more up-tempo stuff that would be great”.  Now don’t misunderstand, a “banger” can be all things to all men!  So across, the ten tracks here  there’s no soulful house, no EDM, no fierce  funk, nothing frantic. A ‘Ticket To Shangri La’ is essentially the sound of Young Gun Silver Fox but with maybe a little more pace, a little more intrigue and interest.

Let’s take the opener, ‘Still Got It Goin On’ as an example. This one opens with a lengthy, clever  intro – just over a full minute  before the bass heavy groove  kicks in behind the band’s signature melody and harmonies. A great start to the album. Elsewhere ‘Tip Of The Flame’ features some funky guitar (not JB style funk, of course, but you get the picture!”) while ‘Simple Imagination’ features a soulful sax solo (alas uncredited on my copy!). Classic old school Young Gun Silver Fox sounds come via ‘Sierra Nights’ and ‘Lodestar’ while the closing ‘Freak Flag’ allows Andy and Shawn to let their sonic imaginations flow! Great stuff!