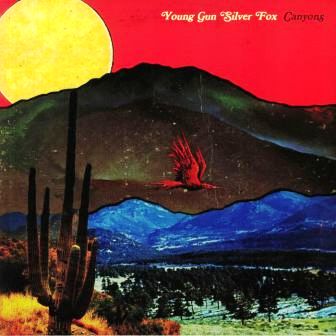 YOUNG GUN SILVER FOX are a pair of inventive and prolific music craftsmen …Andy Platts from Mamas Gun and multi-faceted muso Shawn Lee. Platts and Mamas Gun have won acclaim for their blue eyed soul albums while singles like the recent ‘Say You’ll Be Mine’ – a sweet, soulful ballad featuring K-Pop vocal star Kwon Jin-Ah – have been soul chart riders. Lee for his part is a proper music chameleon. The 55 year old Wichita-born multi instrumentalist is a noted producer and award-winning video game, TV and film composer. Of mixed ancestry (his mother enjoys Lebanese and American Indian ancestry and his father is Irish American) and now based in London, he’s recorded solo and as a member of various bands across different genres. Amongst his various recorded incarnations is Shawn Lee’s Ping Pong Orchestra.

The pair bring all their past experiences and influences to the Young Gun Silver Fox sound, which, on the sleeve notes to this, their third album, they describe as “Westcoast, AOR, soft rock and boogie“. To flesh that out we could say that the sound is a hybrid of America, Steely Dan, Fleetwood Mac, The Doobie Brothers, Carly Simon, Hall & Oates, Michael McDonald and 70s soul and disco. It’s unashamedly old-fashioned, melodic and harmonic (some, I believe, call it “yacht rock“) and by now you may be familiar with it via this album’s first single, ‘Kids’. The sound is sweet and accessible but the message in the music is a little more enigmatic (yes, in the Steely Dan way!) The pair say that ‘Kids’ is all about “living through the lens of a child – or placing yourself in the shoes of a child” while the general theme of the ‘Canyons’ album is the story of “the arc of a relationship – with diversions into semi-autobiography, fantasy and removed observation”.

Make of that what you will… but the music is terrific. Highlights abound…. ‘Long Distance Love Affair’ is all enveloping in its beauty… the single in waiting; ‘Danny Jamaica’ comes on like a 70s TV theme (think ‘Rockford’); while ‘All This Love’ is as plaintive a ballad as you’ll hear this year.

Platts’ falsetto is sweet and pure throughout; while Lee’s inventiveness seems to know no bounds. It’s all very clever and very smart but each track packs its own accessible punch.