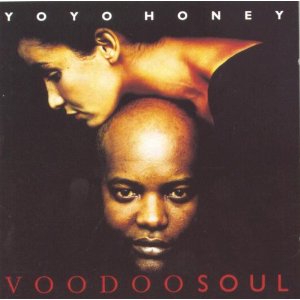 Yo Yo Honey’s 1991 long player, ‘Voodoo Soul,’ was one of that decade’s most important underground soul scene albums. It acquired an almost mythical status on the back of the infectious and hypnotic single ‘Groove On’ and the set’s in-demand status has grown apace because it’s long been out of print and never been available as a download. Well, those who know of the album but have never managed to acquire it and/or those with worn out copies can rejoice – ‘cos the seminal work is back amongst us!

It seems that the project co-writer and bass player on the original LP, Mani Shoniwa, relicensed the album back from Sony (who own the rights to the old Jive label catalogue); he set about re-mastering it and after much toiling at the decks it’s just hit the sales racks in all its new polished glory… and, you know, it’s as good as it ever was. Sonically it recalls the multi-layered, atmospheric, symphonic, electronic soul that Marvin Gaye and Leon Ware pioneered. Original producer Mike Peden was a big fan of that Gaye/Ware axis and he brought together a huge team to help him craft the sounds that were spinning round in his head. To a 40 piece orchestras he added some of the players from Soul II Soul and in the lovely Anita Jarrett he uncovered a singer with just the right balance of nonchalance and commitment to give Yo Yo Honey a “for real” sound.

‘Groove On’ is still outstanding … no wonder it can still pack dance floors some twenty years after its initial release. ‘Get It On’ – a tad smoother and a little more sophisticated – runs it close though. This one was always a big tune in the more discerning clubs and, re-presented, it’s lost none of its magic. Elsewhere the LP’s title cut still sounds broody and full of menace, ‘Don’t Stay Away’ is another sweet and crisp dancer while ‘Circle On You’ is one of those intriguing, meandering ballads … the kind that Leon Ware specialised in. They all make for an absolutely classic late 80s/early 90s UK soul album that should be snapped up before it disappears again.

The good news is that the Yo Yo Honey team is currently working on new material with people like Bootsy Collins and Bernie Worrell for release in Spring2013… in the meantime serious investigation of ‘Voodoo Soul’ is recommended.