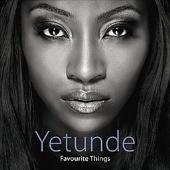 Nigerian born Yetunde (Johnson) has already caused a buzz with her single ‘Mr. G Q’. Self-penned, the song and production were right on the current pop/R&B pulse and though it didn’t trouble soul purists, the song and its various remixes were play listed by both radio and club jocks. For those who like that kind of energized, thumping R&B, then there’s lots more on this debut set. ‘I’m What You Want’, the album’s title cut and much more besides are all seemingly based around the whole Beyonce/Rhianna thing, while the fairly obvious ‘Sweet Sexy Thing’ proves that Ms. J can do pouting and come ons with the best.

Halfway through, though, the album changes direction as Yetunde launches into a mixed bag of soul ballads – of which ‘In Between’ is reasonable. Then, right at the end , in a bravado act of self-confidence she offers the album’s only cover version – a take on Thom Bell and Linda Creed’s’ You Are Everything’. Yetunde’s version is based on Marvin and Diana’s reading rather than the Stylistics’ and she drafts in Haydon Eshun (he of Ultimate Kaos fame) to take on the Gaye role. Clearly neither of the youngsters are in the same class as the Motown duo but they acquit themselves well and the Nimp/Danny Schogger production, though very close to the Motown track, offers a little variety towards the end. Unsurprisingly, soul folk will find this track the LP’s standout – head and shoulders above everything else on the LP. Therein lays the dilemma for young artists like Yetunde. Should she stick with her own (often derivative and occasionally weak) songs or rely on the tried and tested? Cleanly she has vocal potential (and, important in this day and age) the looks to make it, but which direction will she take?