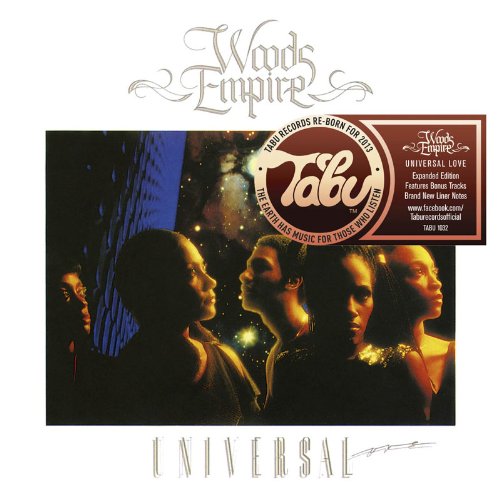 A five-piece family group from Diamond Bar, California, Woods Empire debuted for Clarence Avant’s Tabu label in 1982 with ‘Universal Love,’ an album that was first reissued on CD a few years ago by the UK label Funky Town Grooves but which is now reissued as part of an official revival of the Tabu catalogue.  Comprising sisters Linda, Rhonda, Judy and Iris plus brother Tommy, the vocal quintet hooked up with producer David N. Crawford who corralled some of LA’s finest studio musicians for the sessions (they included keyboardist John Barnes, guitarists Paul M. Jackson and David T. Walker, bassist Nathan Watts, drummers Ollie Brown and Ed Greene and the busiest percussionist in town, Paulinho da Costa). The resulting album yielded a minor US R&B chart entry with the single, ‘Sweet Delight,’ but for various reasons, virtually sank without trace. Liner note author Scott Galloway reckons that fate conspired against the group by heaping on them lots of bad breaks, one of which was poor album promotion. Listening to ‘Universal Love’ now – which is an above-average early ’80s meld of vibrant dance floor funk and succulent slow jams – it seems wholly conceivable that the group was dealt an unlucky hand.

The minor hit single, ‘Sweet Delight’ – which is represented by an extended mix as well as the original album version – is a catchy dance floor number propelled by Paul Jackson’s staccato guitar riffing and sounds reminiscent of something that Shalamar by have done back in the same timeframe. Another mirror ball cut, ‘The Boogie’s Gonna Get You,’ is less effective and highlights the fact that the group’s slower material has aged better. Indeed, the most impressive cut of all is the dreamy, mid-tempo title track, which with its measured, atmospheric groove, ethereal strings and superb vocals reaches an artistic level that transcends the rest of the album’s material. ‘Destiny’ is another good ballad, as is the romantic slow jam, ‘Misty Eyes,’ both highlighting the group’s vocal strengths. Appended to the original 9-track album are five bonus cuts; three are extended single mixes of album cuts but two are non-album tracks comprising the group’s 1982 single, a sweet remake of the late Deon Jackson’s ‘Love Makes The World Go ‘Round’ and its flipside, the funky dancer, ‘Come On Give Me Love.’ Sadly, a second album never materialised and Woods Empire bit the dust never to be heard of again. This ace reissue offers an opportunity for a new generation of listeners to hear the group – hopefully this time around, their talent will earn greater appreciation.