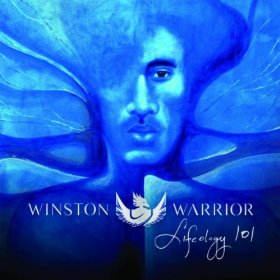 Winston Warrior might sound like an ’80s reggae artist – but he isn’t. He hails from Atlanta but in the ’90s he decamped to the Miami area where he joined boy band Lo’Profile. They enjoyed a couple of less than low profile hits and when things started to slow down the group split and young Winston blamed the label and the business. Disillusioned, he went to college and got himself a business degree and nurtured ambitions to become a corporate hot shot. Music, however, called him back… and thank goodness, ‘cos he’s got a great soul voice – reminiscent of either/or K –Ci and Jo Jo. The grandiosely titled ‘Lifeology 101’ is his debut and the twin label it’s on kind of states where he’s coming from and what he’s about. He sees the album as a new start for himself and though the music – all original – is new he sees it as a throw back to what he perceives as the great days of R&B – the time of Luther Vanrdoss, Freddie Jackson Alexander O’Neal et al.

Yes, it’s a great sentiment. They were all great artists and worthy role models but the big difference is that all those legendary luminaries had great material to work with. The 11 songs Winston offers here are all OK and – for an indie album – they’re lavishly produced but no single track really stands out and grabs you. What you get are formulaic beaters and a smattering of ballads that re-tread familiar themes. Winston’s chosen ‘Bad For U’ as the lead single and it’s built on tight beats and boasts a pleasing melody but it just lacks that magic ingredient. Maybe Winston knows that ‘cos he offers it up right at the end in a faster remix – not quite in house territory, but on its way. ‘Keep Movin” and ‘Walk With You’ are decent beaters too while ‘Winner’ is another mover – and – interspersed with short raps – it could’ve come from Volume 1 of Guru’s ‘Jazzamataz’

Ballads like ‘Get On’, ‘Tuck U In’ and ‘Crossroads’ would fit into any radio station’s quiet storm segment but listeners will wonder where they’ve heard the songs before without being able to pin things right down. The strained ‘Elevator’ is the best example of audio déjà vu. The lyrics focus on massage oils, taking things slowly and – never forget – an elevator goes up… and down.