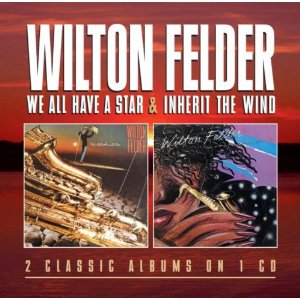 Houston-born Wilton Felder is one of the all-time great sax men with a distinctive and unique signature sound. As an integral part of the Crusaders he’s enjoyed a long and distinguished career and like fellow band members, he’s also enjoyed solo success. His first solo outing was 1970’s ‘Bullitt’ but as the Crusaders career soared his solo ambition went on the back burner till 1978 when he released his ‘We All Have A Star’ long player which was followed in 1980 by ‘Inherit The Wind’. Both albums were critically acclaimed and ‘Wind’ was a steady seller. Taking that and Felder’s status into consideration, it’s surprising to learn that neither album has ever been reissued on CD! Till now, that is; here Robin Songs bring the two sets together in an admirable twofer – and with concise sleeve notes from leading soul writer, David Nathan, the pack is unmissable.

The 8 tracks of ‘We All Have A Star’ logically start proceedings and musically the sound’s not a lot different to the music the Crusaders were making at the same time … not surprising since Felder’s supported by fellow Crusaders, Joe Sample and Stix Hooper. The LP’s title cut is a standout (great vocal from Khabir Ghani, by the way) but check out, too, the funky percussive ‘You Me And The Ecstasy’ – a vocal duet between Ghani and Debbie Demoia Ross… both great examples of late 70s crossover soul-jazz.

‘Inherit The Wind’ has always been a better-known album – chiefly because of the presence of the great Bobby Womack on two cuts – the timeless, irresistible title track and a poignant version of the oft-covered Donny Hathaway gem ‘Someday We’ll All Be Free’ . Both remain exceptional but other noteworthy tracks include the Brazilian-flavoured ‘Until The Morning Comes’ and the loose and jazzy ‘L.A. Light’.

Felder, of course, continued to work on solo projects (including more collaborations with Womack) but none matched the consistent excellence and variety of these two.