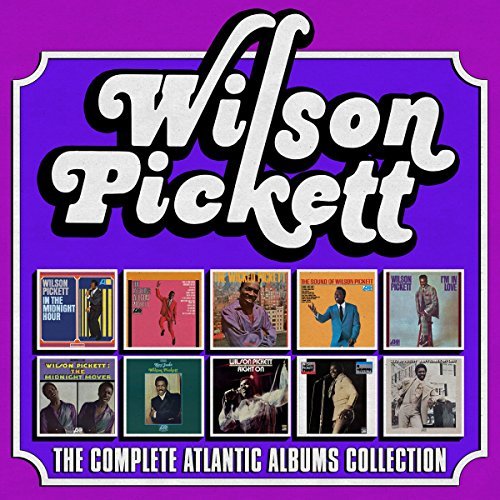 If there’s one song that defines the driving, energetic style of this raspy-voiced Alabama soul singer, it’s ‘In The Midnight Hour,’ which topped the US R&B charts in 1965. But as this magnificent 10-CD box set reveals, there was so much more to the man they dubbed ‘Wicked’ Pickett than his anthemic signature song.

Though gospel-reared Pickett didn’t start his recording career at Atlantic – he scored three charting R&B singles for Harold Logan and Lloyd Price’s Double-L  Big Apple indie label in the early ’60s – it was where his musical vocation truly took flight, allowing him to reach a wider audience and register on the radar of the mainstream public. His tenure with the label lasted seven years (from 1965 to 1972), and during that fertile time he racked up almost fifty charting singles in the USA and released ten albums, which can all be found presented in mini-replica LP sleeves in this clam shell-style box set.

Given that ‘In The Midnight Hour’ was Pickett’s debut smash for Atlantic, it was no surprise that his inaugural album for the label had the same title. Though just 24 at the time, in terms of his searing vocal performances and magnetic stage presence, he seemed much older than his years. That was probably due to the experience he gained from his apprenticeship in the Detroit R&B band, The Falcons. Other highlights of his Atlantic debut album, which, significantly, was recorded at Stax studios in Memphis,  included the hits ‘Don’t Fight It’ and ‘I Found A Love.’

Pickett’s next album, 1966’s ‘The Exciting Wilson Pickett’ – featuring the classic smash hits ‘634-5789 (Soulsville USA)’ and ‘Land Of 1,000 Dances’ – was recorded at Fame studios in Alabama and did better than his debut. In 1967, the singer released two albums- ‘The Wicked Pickett,’ another hit album packed with gems (among them the perennial favourite, ‘Mustang Sally,’ and ‘The Sound Of Wilson Pickett,’ which included  the chart-topping single, ‘Funky Broadway.’ He covered four Bobby Womack songs on ‘I’m In Love,’ released in 1968, whose gentle title cut was a Top 5 US R&B hit and demonstrated that Pickett was more than a soul shouter and could play the role of accomplished balladeer as well.

His second album of 1968, ‘Midnight Mover,’ also had considerable input from Pickett’s songwriting buddy, Womack, again, and they wrote the LP’s strutting title track together. The Womack-co-penned ‘I Found A True Love’ is also another high point on the LP with its raucous energy and Pickett’s blood-curdling screams.

Up to this point, all of Wilson Pickett’s Atlantic LPs had nestled comfortably in the Top 10 of the US R&B albums but 1969’s ‘Hey Jude,’ could only make #15. Its title song was a mellow, soul-infused cover of The  Beatles’ epic 1968 ballad, complete with the ‘Na-Na-Na’ sing-along chorus at the end, with Pickett wailing over the top like a banshee. The growing influence of rock can be felt on an energised cover of Steppenwolf’s counterculture anthem, ‘Born To Be Wild,’ which expressed a sentiment that the volatile Pickett could no doubt relate to. 1970’s ‘Right On’ LP also found Pickett tackling rock (Hendrix’s ‘Hey Joe’) and pop (the Archies’ ‘Sugar Sugar’), which some commentators perceived as a sign that the singer was losing his way.

That was probably a fair assessment but just when Wilson Pickett’s career seemed to be losing momentum and direction, he unleashed a masterpiece in the shape of ‘In Philadelphia,’ recorded under the aegis of rising production duo, Kenneth Gamble and Leon Huff, who had helmed hits for Jerry Butler in the late-’60s and would go on to found Philadelphia International Records in 1972. In terms of its production and lush orchestral arrangements, ‘In Philadelphia’ was eminently more sophisticated than his previous LPs. Yielding the memorable hits ‘Engine No. 9’ and the searing ballad, ‘Don’t Let The Green Grass Fool You,’ it proved to be one of Pickett’s most cohesive artistic statements and still sounds potent today.

The final album in the collection is 1972’s ‘Don’t Knock My Love,’ which mopped up earlier singles (1971’s R&B chart-topping title cut and Top 10 smash, ‘Call My Name, I’ll Be There’) and also included an R&B reconfiguration of British blues-rock group Free’s ‘Fire & Water.’

After this, Wilson Pickett made a move to RCA in 1973, but it signalled the start of an artistic decline from which he never truly recovered – and when the disco era came along, it put paid to any chances of a full-blown career renaissance. This box set, though, captures Wilson Pickett during a fertile 7-year spell when he was at the apex of his powers. Though the absence of a liner note commentary and non-album bonus material, is a tad disappointing, it doesn’t detract from the importance of this set, which contains some of the most powerful and committed old school soul performances ever committed to tape. Retailing at around 25 quid, ‘The Complete Atlantic Albums Collection’ is an absolute steal. Truly wicked.