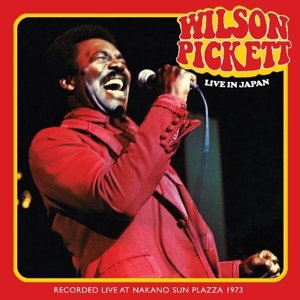 Wilson Pickett was the undisputed wild man of soul in the 1960s and ’70s – so much so that his nickname, ‘Wicked Pickett,’ was coined as much for his volatile personality and off-stage antics as his impassioned, throat-shredding vocal style. The Alabama singer – who had first made his name fronting The Falcons in the early ’60 – is best remembered for his hit-packed tenure at Atlantic Records between 1963 and 1972, which yielded 30 US R&B chart entries and included such iconic soul records as ‘In The Midnight Hour,’ ‘634-5789 (Soulsville USA),’ ‘Land Of A Thousand Dances,’ ‘Mustang Sally’ and ‘Funky Broadway.’ In 1973, though, Pickett jumped ship to major label, RCA, then home to acts as diverse as Elvis Presley, John Denver and David Bowie. Unlike Atlantic, however, RCA didn’t have much experience in dealing with R&B acts and it’s no surprise that Pickett’s career began to falter after he joined them.

Recorded in 1973 at Nakano’s Sun Plazza venue and released in 1974, the double album ‘Live In Japan’ was Pickett’s fourth LP for RCA but failed to sell enough copies to enter the US R&B albums charts. It now comes to CD for the first time (in a two-disc set) and turns out to be an interesting listen, especially if you’re an aficionado of classic soul music.  Pickett’s in tremendous form and is accompanied by a standard rhythm section that is augmented by percussion and horns (though sadly, the members of Pickett’s backing band aren’t listed in the credits). The material includes several of his Atlantic-era  signature songs – including a superfast turbo-charged version of ‘In The Midnight Hour’ that morphs into a hypnotic adlibbed groove called ‘Soul Train’ and a drawn-out take on ‘Don’t Let The Green Grass Fool You,’ which includes some vocal scatting and a duet with his bass player.  There are also several covers, including the John Fogerty-scribed Creedence Clearwater Revival hit ‘Proud Mary,’  The Association’s ’60s pop smash, ‘Never My Love,’ Bobby Womack’s ‘I’m In Love,’ Brit blues-rock group Free’s ‘Fire & Water,’ and bizarrely, The Archies’ bubblegum pop smash, ‘Sugar Sugar.’ Despite the questionable quality of some of his source material, Pickett shows why he’s revered as a soul singer: whatever he chooses to sing, he’s able to stamp his own personality on a song and transform it into an impassioned soul sermon.

‘Live In Japan’ isn’t an in-concert album classic in the vein of Donny Hathaway’s ‘Live’ or James Brown’s ‘Live At The Apollo’ but it is nevertheless a valuable audio document of Wilson Pickett when he was still at the top of his game.