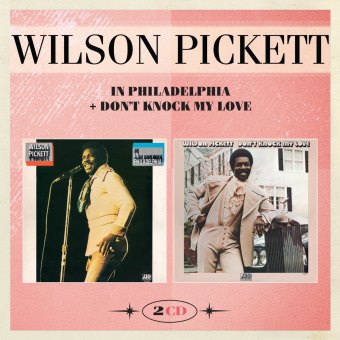 January 2017 will mark the eleventh anniversary of the death of Wilson Pickett, the flamboyant, Alabama-born soul man who achieved immortality via such evergreen ’60s R&B hits as ‘In The Midnight Hour,’ ‘Land Of 1,000 Dances,’ and ‘Mustang Sally.’  This particular twofer is my pick of Edsel’s excellent 2-on-1 reissue programme of Stax and Atlantic titles (five in all), combining  1970’s ‘In Philadelphia’ with 1971’s ‘Don’t Knock My Love.’ The first album teams up  Pickett with then rising Philadelphia songwriters and producers, Kenny Gamble and Leon Huff, who frame his raspy soul shout with string and horn arrangements, while the second album, finds Pickett on more familiar soil in Muscle Shoals, Alabama, with Brad Shapiro and Dave Crawford at the helm.

Though in terms of their sound, the two albums are quite different from each other, Wilson Pickett stays true to himself on both sets, delivering impassioned, throat-shredding vocals. While ‘In Philadelphia’ is certainly more urbane than any of Pickett’s previous albums and boasts a greater musical sophistication in places, Gamble & Huff, while adding a bit of orchestral polish here and there, don’t attempt to erase or replace the grittiness of the singer’s raw, earthy style. He’s in full-on scream mode on the funkafied hit single, ‘Engine Number Nine,’ though in acute contrast, the album’s biggest hit single, ‘Don’t Let The Green Grass For You,’ has an easy-swinging, jazz feel.

Bonus tracks for this set include single edits of the two principal chart hits already mentioned plus assorted non-album singles and their B-sides, a remix of ‘International Playboy’ and two live cuts from the same era – ‘Funky Broadway’ and ‘Land Of 1,000 Dances,’ both recorded in Accra, Ghana in 1971 (and recorded for the ‘Soul To Soul’ documentary movie).

In contrast, ‘Don’t Knock My Love,’ finds Pickett back in the south at his old Muscle Shoals stomping ground for what would turn out to be the singer’s final studio set for Atlantic. It’s an accomplished set, with sterling production from Crawford and Shapiro, whose use of the Memphis Horns and a string section add class and a glossy sheen to the proceedings but without relinquishing Pickett’s trademark earthiness. Though its lead off cut, Pickett’s combustible take on British blues-rock band Free’s ‘Fire & Water,’ was a big US R&B hit in 1972,  its most impressive song is the title track, a throbbing slice of funk  which appears in two parts; the second part a mind-blowing symphonic instrumental excursion arranged by Wade Marcus that comes across like a Lalo Schifrin movie score piece. There are also seven bonus cuts added to this reissue, including five non-album outtakes from 1971 and ’72 that weren’t released at the time (and were only previously available on a 2010 Rhino box set). It all adds up to a must-have package that serious connoisseurs of vintage soul shouldn’t ignore.