WILLIE HIGHTOWER: Out Of The Blue (Ace) 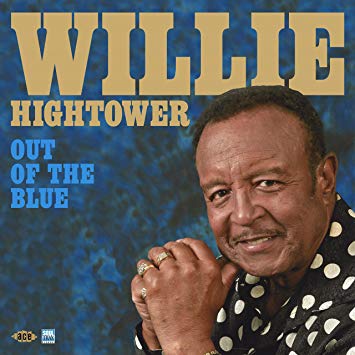 Willie Hightower is a real soul veteran. Well, he is 77! Born down in Gadsden, Mississippi he came to soul music via the oft-trod gospel route and in a lengthy career he’s recorded for labels like Fire, Fury, Capitol, Fame and Mercury. All the singles he recorded for those labels are revered by serious Southern soul collectors; some of Willie’s singles even became reasonable hits – 45s like ‘It’s A Miracle’ and Willie’s version of ‘Walk A Mile In My Shoes’. However, even Mr H’s devoted fans would admit that he never (sadly) became a soul major leaguer. But the man’s still working – playing the clubs and bars in and around his hometown. He’s also in demand at soul festivals and it was on the festival circuit that he hooked up with veteran producer Quinton Claunch (yep, the Goldwax man). Big Q (he’s a sprightly 96, by the way) is still working the business and he had a hunch that it was time Willie Hightower got back to making records. The pair decamped to Muscle Shoals’ Wishbone Studios and with top notch musicians like Billy Lawson, Clayton Ivey and Travis Wammack they set to work cutting tracks and the finished long player is set to be released at the end of this month by Ace Records and without wanting to sound too hyperbolic I can tell you there won’t be a better, proper, authentic soul record released all year. In short, this is classic, good-time, old school soul – the stuff that young shavers like James Hunter and Van Morrison (sometimes) try to create. But the original is still the greatest and here, enjoy some great music.

The album opens with a gorgeous ‘I Found You’ – brassy, melodic, sweet Southern soul and ends with ‘Who Who Who’ – more sombre but every bit as “authentic”. In between there’s plenty more excellence – try ‘Raining All The Time’ and ‘Somewhere Dry’ – two classic, heartbreaking Southern “story songs” in the ‘Rainy Night In Georgia’ vein. Then there’s ‘Everybody Wants My Girl’ and ‘You Can’t Love Me (Better Than You’re Loving Me Now)’ – standouts on any album. Willie and the team even make a remarkable job of Andy Kim’s pop hit ‘Rock Me Gently’.

Despite the years, Willie’s voice has lost none of its attraction and charm and each track just grooves along effortlessly; here there’s nothing forced or gimmicky… just sweet soul music as it was and as it should be and ‘Out Of The Blue’ is such an apt title. The album has come, it seems, from out of nowhere. Till hooking up with Claunch and Ace, Willie had just about given up hope on ever recording again! Remarkably, despite a six decade career, ‘Out Of The Blue’ is only Hightower’s second long player! Fingers crossed it’s not his last.