WILLIE DIXON AND OTHERS; The Willie Dixon Story (Proper Records) 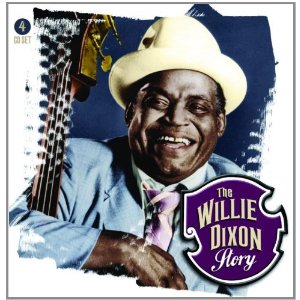 When the legendary WILLIE DIXON wrote his autobiography he elected to call it ‘I Am The Blues’. Quite a claim! If you think about it, however, who else could make the same claim?

Born down in Vicksburg, Mississippi in 1915, William James Dixon first came into contact with the blues when he served time in on various Delta prison farms for a series of minor misdemeanours. On release he turned to gospel music but soon learned that a career in boxing might bring him more dollars. So moving to Chicago, he became a pugilist and for a time was sparring partner for the great JOE LOUIS. DIXON had just four fights before a money dispute with his manger led him to quit the sport. Just prior to that though he’d met LEONARD CASTON (another future Chess luminary) at a local gym. The pair discovered a mutual love for music – they found they could harmonize well – and CASTON made him a bass to beef up their impromptu sessions. The pair performed in various groups before DIXON was imprisoned again as draft dodger during the call up for World War II.

On release DIXON worked in an around the Chicago music scene and in 1950 he signed to Chess Records as a recording artist, but he began performing less, being more involved with administrative tasks for the label. By 1951, he was a full-time employee at Chess, where he acted as producer, talent scout, session musician and staff songwriter. To resort to cliché the rest is history… working with the likes of MUDDY WATERS, BUDDY GUY, HOWLIN’ WOLF, OTIS RUSH and JUNIOR WELLS he crafted a whole new musical genre – modern, electric blues; then there was his seminal and innovative work with CHUCK BERRY and BO DIDDLEY not to mention his forays into embryonic soul with artists like BETTY EVERETT and SUGAR PIE DESANTO.

Quite a story – and one told much eloquently through the man’s music. Hear it all to splendid effect on a brand new four CD box set just released on Proper Records. ‘The Willie Dixon Story’ is a phenomenal testament to a unique talent. Each of the four CDs focuses on a particular aspect of his work – as a performer, as a session player, as a songwriter and as record company man. There’s so much significant music here that it would be churlish to single anything out – but if he’d only been involved in ‘I’m Your Hoochie Coochie Man’ for MUDDY WATERS and nothing else his place in music history would have been secure… but here we’ve also got HOWLIN’ WOLF’S ‘Spoonful’, LITTLE WALTER’S ‘My Babe’, CHUCK BERRY’S ‘Johnny B Goode’, THE MOONGLOWS’ ‘Sincerely’, BO DIDDLEY’S ‘Pretty Thing’ and much, much more.

In his notes, writer RUSSELL BEECHER sums up DIXON’S importance thus: “It’s safe to say that Blues, Soul, Rock N Roll, Rock and popular music as a whole would sound completely different if WILLIE DIXON hadn’t been around”.