WILLIAM BELL: ‘This Is Where I Live’ (Stax) 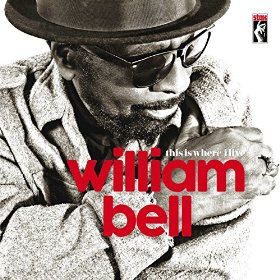 William Bell’s name will forever be associated with Stax Records, of course, due to the eleven US R&B hits that he racked up for the label between 1966 and 1974. Ironically, though, his biggest smash was ‘Tryin’ To Love Two’ for Mercury in 1976, which was a US R&B chart topper and Top 10 American pop hit. Even so, his tenure at Mercury was short-lived and if Stax hadn’t gone out of business in 1974, it’s more than probable that Bell would have stayed with the label. That’s because in terms of the label’s aesthetics, culture and philosophy, Stax was his home. It’s fitting, then, that the 76-year-old Memphis soul man returns on Stax, the label that’s synonymous with his name. Of course, the revitalized label – now an imprint of corporate, Universal-owned Concord – isn’t what it was but it seems appropriate that Bell is back with the legendary company that was first started in 1957 by siblings Jim Stewart and Estelle Axton.

Having seen William Bell perform recently at the North Sea Jazz Festival, I can attest that in terms of both his voice and stage performance, he doesn’t come across like a man who’s only four years away from his eightieth birthday. He showcased many of the songs from this brand new album, his first long player in ten years, in Rotterdam at North Sea and it’s testament to their high quality that they didn’t sound out of place alongside his vintage Stax sides like ‘I Forgot To Be Your Lover’ and ‘You Don’t Miss Your Water.’  Recorded in New York and produced by multi-instrumentalist, John Leventhal, ‘This Is Where I Live’ is a reflective album whose nostalgic tinge is crystallised by the superb title track, an anthem about belonging and identity.  Most of the tunes are co-written by Bell and his producer and whether he’s singing about love (epitomised by ‘I Will Take Care Of You,’ and ‘Walking On A Tightrope,’ both of which are plaintive declarations of faith), recalling a corrupting femme fatale (the excellent, Biblical-themed ‘Poison In The Well’) or painting an atmospheric portrait of times gone by (‘Mississippi-Arkansas Bridge’), Bell does so with the aplomb and assurance of an expert storyteller. Masterful stuff.