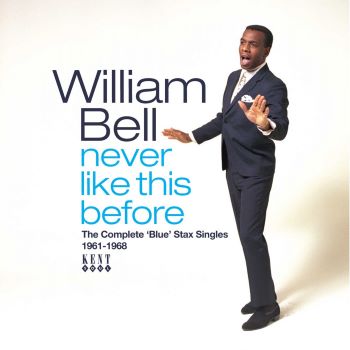 Memphis’ William Bell is a soul man’s soul man – a proper soul singer who’s little known in the mainstream but revered by those who know what soul is really all about. Bell (real name William Yarborough), of course,  will  for ever be associated with the iconic Stax label… and rightly so. Our Bill was with Stax for virtually its entire 15-year existence. He was only away when Uncle Sam called – but he was still signed up to the label evn then!

Over the years the UK’s Ace Records has assiduously curated the Stax catalogue and released plenty of William’s material but they’re now embarking on a splendid Bell project. Via their Kent subsidiary, Ace are all set to release 2 albums  of each of the singer’s Stax singles (A and B sides) in chronological order  and ‘Never Like This Before’ represents the first in the series. The wonderful 28 tracker chronicles all of Bell’s releases between 1961 and 1968 – what we could call “Stax’s Blue Period” – the label was pale blue with that famous stack of singles!

The album opens with Bell’s iconic, Southern soul classic ‘You Don’t Miss Your Water’ and ends with ‘Every Man Ought To Have A Woman’ which in 1968 eventually became the B side to ‘A Tribute To A King’ – Bell’s heartfelt tribute to Otis Redding, recorded and released with the full permission of Otis’ widow. Zelma Redding knew how much Bell and her husband respected each other and had no hesitation in allowing the release. Remember, too, that Otis had recorded ‘You Don’t Miss Your Water’ on his classic ‘Otis Blue’ LP. So topping and tailing  this set  like this brings a nice synchronicity!

In between those songs you can enjoy all of William’s hits and near misses and excellent B sides as well as  tracking  the subtle evolution of his sound. So enjoy  things like ‘Everyday Will Be Like A Holiday’, the punchy ‘Eloise (Hang On In There)’, the novelty ‘Monkeying Around’(listen up to the Curtis Mayfield inspired guitar intro!) the cover of the country song ‘Please Help Me I’m Falling’, the lovely “urban” sound of ‘Who Will It Be Tomorrow’, the tear-jerker ‘Crying All By Myself’  and a whole lot more.

Throughout, William is backed by members of the legendary Stax house band, Booker T & the MGs and the Memphis Horns. The booklet is extensive and the whole package is a wonderful tribute to the 82 year old soul man who is still out there performing – and, we’re told, featuring many of the songs included here.