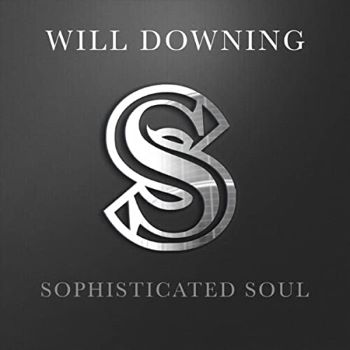 Will (did you know his full first name was Wilfred?) Downing broke through way back in 1988 with his incendiary version of John Coltrane’s ‘A Love Supreme’ – a UK top 20 hit and a top 5 on the US dance chart. Since then the chart hits have  been few and far between. Mr Downing, it seems, was never bothered too much by that. Indeed he changed tack, away from the dance sounds of ‘A Love Supreme’ towards a mellower, smoother, sexier soundscape that he’s peddled via two dozen albums – most of which have been steady sellers – 2007’s ‘After Tonight’ actually topped the US R&B/soul chart! Little wonder that critics have dubbed our Will “the Prince of Sophisticated Soul” – a  title he likes so much that he’s used it to name his own record label for it! Now, he’s gone one step further and used the same sobriquet for the title of his latest studio album.

This 8 track ‘Sophisticated Soul’ long player was  heralded back in August with the single, ‘The Warmth Of You’. Self-produced and co-authored with keyboardist Mike  Logan and drummer Michael Logan Jr., the tune was replete with all the classy, quality hallmarks that we’ve come to expect from Will – a rich, velvet voice delivering an adult song with passion, desire, want and love – an aural definition of ‘sophisticated soul’, if you would.

The remaining seven cuts offer more of the same in such a sweet blend of sensuality and sophistication that cherry picking any kind of highlight would be a redundant exercise. Here, though, are a few pointers. ‘Baby I’m Yours’, the second sequenced track (following The Warmth Of You’) and a collaboration with Rex Rideout, rides a classic 90s groove- hints, too, of dear old Teddy Pendergrass. Echoes of TP again on ‘Never Wanted Anybody’. The credits don’t mention any Philly input but the roots of the track are in the City of Brotherly Love. Najee guests on this one.

The sub-conscious influence on ‘Come To Me ‘ has to  be the Isleys. The Randy Bowland guitar on the track is very Ernie Isley! Amongst the other album guests is Eric Roberson who adds BVs on ‘Love Language’ .

The remaining tracks are the late night soundtrack that is ‘Let’s Go’, the nostalgia-packed ‘Old School Love’ (a homage to the classic group sounds of bands like the Dells and the Temptations) and the album’s only non-original song – ‘When I First Saw You’  (from the ‘Dreamgirls’ musical) which Will makes his own – sophisticated and soulful … would be a great name for an album, that!