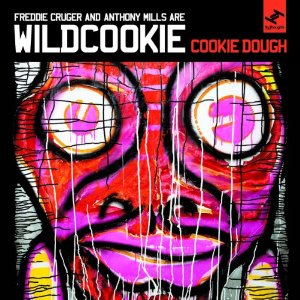 ‘Cookie Dough’ is a strange album. It’s not soul, hip-hop or R&B but throughout its 14 tracks you’ll hear elements of each of those three genres – along with various sized helpings of retro electro, Latin and jazz. The duo who have crafted this odd album – Wildcookie – are Freddie Cruger and Anthony Mills. Cruger lives and works in Stockholm and he’s previously recorded under various names –most notably Red Astaire. Vocalist Mills has worked on the road and in sessions with all kinds of artists including Krs-One, Amy Winehouse, Leela James, Maxi Priest and Sly Dunbar and he first worked with Cruger on the song ‘Heroine’. That tune was championed by Gilles Peterson and though it’s been out before its one of this set’s focal points. It’s a sparse, haunting tune and like many of the album’s other songs I’m not quite sure whether it’s pro or anti drug; the theme is that “heroin(e) made my favourite jazz” and it’s delivered in Mill’s wonderfully beguiling, fractured falsetto – quite mesmerising.

There’s more lyrical ambiguity on ‘Serious Drug’. Though it’s essentially a litany of artists who’ve endured a cocaine problem, the musical setting has a lovely, innocent South African roll to it and, again, that Mills’ vocal carries it off brilliantly. There’s more drug references (LSD) on ‘Song With No Ending’ but there’s a vagueness to it that brings its own sense of intrigue. More oddities? Well, the album’s full of them. ‘Autocoon’ and ‘Piece Of Mind’ have a bizarre electro Kraftwerk feel to them while ‘Flashy, Flashy’ is a delicious slice of soft samba of which any of the Gilbertos would be proud. Not sure where the lyrics were going but the soundscape’s divine; ditto , the slower ‘At The Same Time’ – another great vocal from Mills. Working with Cruger he’s managed to find new ways into soul, hip-hop and R&B and though fans of those styles will find the album hard to accept, those with good old adventurous ears will find things to treasure.