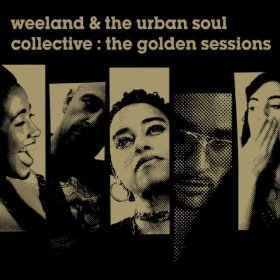 Patrick Wieland (aka Weeland) is a German guitarist with a life-long love of soul and jazz. His Urban Soul Collective is an international affair with Esther Cowens, Brandy Butler, Mika Doo and Raphael Jacob at its core. As if to emphasize their internationalism, the band’s first full album has just been released on the French label, Soul Lab. However, as with the German Cool Million team, you’d be forgiven for thinking that this Soul Collective’s music is American born and bred. Indeed a comparison with Cool Million is a good place to start. Like them, Weeland clearly has an innate grasp of what goes into making a real soul record. It’s obvious that he understands about the technicalities but it’s equally clear that he’s aware of the more intangible elements – like passion, commitment and feeling and most importantly he knows how to bring the best of all that from his team. Unlike Cool Million though, Weeland’s music – though rooted in the past – isn’t a retro pastiche. It’s thoroughly contemporary…. maybe best described as easily accessible nu/neo soul; proper modern soul music , if you would.

There’s lots here to enjoy. Standouts are maybe the restrained catchy mid-paced items – Life’s Simple’ and ‘Butterfly’ (that latter featuring some delicious muted horn work from Joo Kraus), but if you like to dance you’d be better advised to go straight to ‘2 Of A Kind’ – some sweet chord changes here too. ‘L’il Sumthin’ and ‘Josephine’s Lament’ are jazzier and much looser while ‘Easy Come, Easy Go’ is a great little chugger of a tune. For those who prefer things a little slower there’s plenty of decent ballads – like ‘Lullaby’ (exactly as you’d expect) and ‘In The End’ (a track that both Jill Scott and Alicia keys would be proud of).Like I said, there’s lots to enjoy here and you can find out more @ www.soulab.com