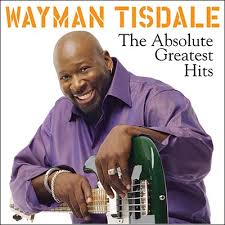 Wayman Tisdale died of bone cancer in 2009. Though only in his mid forties he’d achieved much … indeed much more than most of us could ever dream of. The Tulsa native was a top teenage athlete and represented the USA at basketball while still in his teens – going on to win Olympic Gold in 1984. A successful pro career beckoned and he won major honours with the Indiana Pacers, the Sacramento Kings and Phoenix Suns.

Music was also a passion (his father was a preacher in Tulsa and Wayman played in the Church band) and while playing pro basketball he became a top bass player. As his sports career came to an end he released his first solo album … and in an all too short a musical career he released 8 more (four going to # 1 on the jazz charts). His label, Artistry, have just released this new album – essentially a “best of” set, and as an introduction to Wayman’s music it’s spot on!

Tisdale’s albums were always a soulful mix of well-chosen covers and originals and this newie wisely follows the same template, with 5 of the 12 tracks showing the bassist’s skill at adapting familiar material. Here you can enjoy the man’s versions of stuff like ‘Ain’t No Stopping Us Now’ and ‘Never Never Gonna Give You Up’ (with country star and Tulsa neighbour Toby Keith doing a great job on the vocal). Surprisingly good too is a take on Smokey’s ‘Cruisin” … every bit as sensual as the great man’s original.

Of the Tisdale-originated numbers, it probably won’t surprise you to learn that they’re nearly all crafted to show his virtuosity on the bass – so stuff like ‘Ready To Hang’ and ‘Way Up’ are full of popping bass lines and heavy syncopation. Best of the bunch is ‘Let’s Ride’ which co-stars George Duke, and the duo sound like they had a whale of a time cutting the loose-limbed funky ramble.

Sadly the sleeve notes are non-existent. All you get are the bare bones – no mention of the source albums nor the featured musicians and producers. Still, in creating a comprehensive introduction to the art of Wayman Tisdale the compilers/label have succeeded.