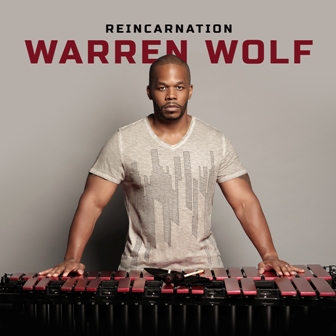 Jazz buffs will recognize the name Warren Wolf. The vibraphonist (a Berklee Music College graduate) was a mainstay on the Boston jazz scene till 2005 when he decamped to Baltimore finding work with people like Bobby Watson, Donal Fox and Christian McBride. He also led his own live band, the Wolfpack and has three albums under his belt as leader. The most recent, 2009’s ‘Black Wolf’, established Wolf as one of the leading straight-ahead vibraphonists in contemporary jazz….with some critics making favourable comparison to people like Bobby Hutcherson and Milt Jackson.

For this latest album, however, the Wolf man takes a change of direction – as the album title indicates. On ‘Reincarnation’ the lauded vibraphonist indulges his passion for the R&B and soul hits that served as the soundtrack to his formative years in the 1990s. Most obvious example on the 10 tracker is the cover of the Isley Brothers’ timeless ballad ‘For The Love Of You’. It’s light and spacey and sufficiently different to the original to offer real interest. The vocal is down to Imani Grace Cooper who caresses the lyric with just the right amount of sensuality. Ms Cooper fronts a clutch of other tracks… notably the neo soul ramble that is ‘Livin’ The Good Life’ and the sweet soul ballad, ‘Sebastian and Zoe’. On that one she duets with the wonderfully-named Marcellus “Bassman” Sheppard.  His nickname says it all… his voice is a cross between the great Melvin Franklin and Barry White… his semi-spoken interludes a foil to Ms Cooper’s light touch. Listen up to their exchanges on the ‘Love Theme From Shaft’ flavoured ‘In The Heat Of The Night’ (an original song… not the Ray Charles one).

Alongside Wolf’s crystalline vibes, Sheppard and Cooper are stars of the show, though the other band members are never overshadowed. On the oddly-named ‘Vahybing’ Richie Goods’ bass dominates while on ‘The Struggle’ Brett Williams’ lovely piano channels the Bob James sound. Williams stars too on the set’s most intriguing instrumental… ‘Come Dance With’. Essentially a duet between the vibes and the piano, it’s not really a call to the floor.

So, yes, it you’re familiar with Wolf’s work – a definite change of direction. The ten tracker (9 originals and that one cover) is smoother and more immediately accessible than his earlier work… down, he tells us, and to the new lease of life he’s found via a new marriage…ah, sweet!