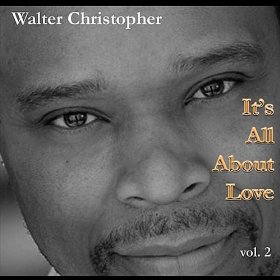 Though hailing from North Carolina, Walter Christopher now lives and works in new York City where for some time he’s been wowing audiences in local neighbourhood clubs – most notably in and around Harlem. Most of those venues are laid-back, late night kind of places, so it’s no surprise that Walter has developed a style that accentuates the romantic side of his nature and vocal style. While recording this – his third full album – he used the working title ‘Walt Got Soul’ but as he laid down one smooth beat ballad after another it felt logical, he says, to rename it as an extension to his first album ‘It’s All About Love’, and the feeling generated here proves that he’s got that one right.

The 9 tracker is unashamedly “music to make love to” – or at least have a damn good try – and that tone is set with a short dreamy introduction passage which segues into ‘Fallen In Love’. The song’s a sweet little ballad complete with spoken intro and gentle acoustic guitar. Decent – but much better follows it in the form of ‘So Amazing’. The song’s not Luther’s, but I can pay it no greater compliment than to say that the great man would have been proud to be involved in it. It’s not quite a ballad – but neither could we call it mid-tempo. It’s easy to hear why it’s been picked up by radio stations across the States while in the UK a few discerning modern soul jocks are using it late on in their sets. It’s the album’s outstanding cut with the Michael Jackson –tinged ‘Tonight’ running it a close second.

There’s a lot to like on this album and if you want to find out more about Walter Christopher go to our “interviews” section for a revealing question and answer session.