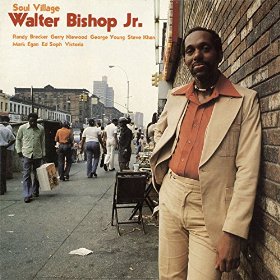 Walter Bishop Jr. was fifty when he recorded this, his second album for Joe Fields’ jazz indie, Muse, in 1977. A journeyman jazz pianist, Harlem-born-and-raised Bishop came of age during the bebop revolution and in the early 1950s he had regular sideman stints playing with alto legend, Charlie Parker. After Parker’s death in 1955, Bishop played with Art Blakey, Stan Getz and Jackie McLean before he cut his debut for the Black Lion label in 1961. In the early ’70s, he recorded a couple of highly regarded albums – ‘Coral Keys’ and ‘Keeper Of My Soul’ – for Gene Russell’s west coast US  imprint, Black Jazz, before landing at Muse in 1974. Out-of-print for decades and never reissued before in the digital age, the pianist’s second Muse album, ‘Soul Village,’ makes its CD debut thanks to UK reissue specialists, Soul Brother.

It turns out that ‘Soul Village’ is a forgotten gem that boasts similar production values to a vintage C.T.I. session. The 6-track album finds Bishop relinquishing acoustic hard bop for electric jazz-funk in the company of horn man, Randy Brecker, and guitarist Steve Khan. The zesty opener, ‘Soul Turnaround’ – propelled by Mark Egam’s funky electric bass line – is Bishop’s own superlative rendition of a tune that he wrote that was recorded by Freddie Hubbard on his 1969 album, ‘A Soul Experiment’ (Bishop had also previously recorded the song on his ‘Coral Keys’ album). It’s followed by a mellow groove ballad, ‘Valerie,’ while ‘Sweet Rosa’ has a palpable Caribbean lilt to it. Different again is the pulsating ‘Philadelphia Bright’ which is driven by Bishop’s percussive Fender Rhodes piano and features funky horn lines plus some nimble fretboard work from the impressive Steve Khan. Mark Egam’s inventive slapped bass solo also catches the ear. ‘Coral Keys’ is a superior revamp of the title tune from Bishop’s first Black Jazz LP, an elegant cut with superbly-blended horn passages and a delightful trumpet solo from Randy Brecker. The album closes with the riveting title track, a lengthy, gloriously funked-up revival of a Latin-tinged tune that had first appeared on his Black Jazz album, ‘Keeper Of My Soul.’ It offers a thrilling coda to an album that has unjustly been neglected and which deserves a wider audience.