VOICES OF EAST HARLEM: ‘Voices Of East Harlem’ and ‘Can You Feel It’ (Soul Brother) 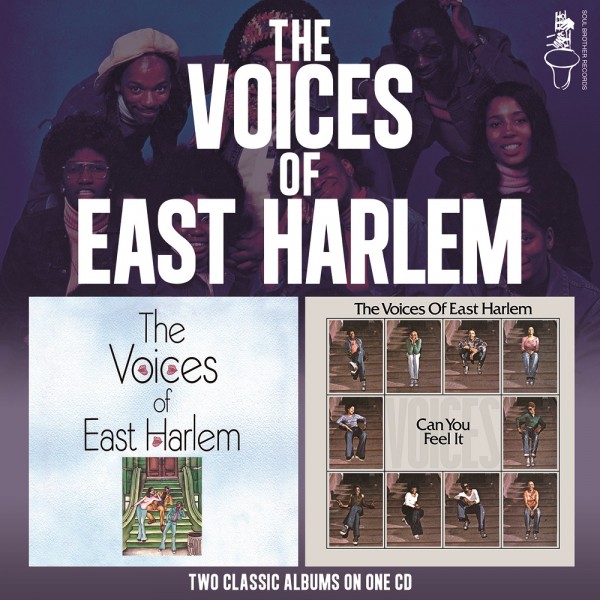 Vocal aggregation, Voices Of East Harlem, began life as the offspring of an inner city youth project in 1969, put together by Chuck Griffin and his wife Anna. They rapidly gained fame in the early ’70s, performing their Afro-topped variety of gospel soul  at major music festivals, including the UK’s own Isle of Wight festival in 1970, where they appeared on a  bill that included The Doors, Sly & The Family Stone, and Miles Davis.  The same year, they released their debut album, ‘Right On Be Free,’ for Elektra. It was the first of two LPs recorded for the label, the other being  an aborted album project with Donny Hathaway at the helm, provisionally titled ‘Nation Time,’ which was never released. But Voices Of East Harlem did their best work for Woodstock music festival promoter, Michael Lang’s indie soul imprint, Just Sunshine, during the years 1973 to 1974. They released two LPs for Just Sunshine –  1973’s ‘Voices Of East Harlem’ and 1974’s ‘Can You Feel It’ – both of which are now reissued as a tasty twofer  by the UK’s rare soul specialists, Soul Brother.

The vocal ensemble’s eponymous debut for  Just Sunshine featured music and production from Curtis Mayfield along with his Curtom sidekick – and, ironically, the singer that replaced the ‘Gentle Genius’ in The Impression – Leroy Hutson as well as arranger, Rich Tufo. It yielded a minor US R&B hit single in the shape of the shimmering, sophisticated  ballad, ‘Giving Love,’ co-written by Hutson with his wife Janice and some of his band. Another Hutson co-write, and without doubt the album’s catchiest cut, was the superb uptempo number ‘Cashing In,’ which mystifyingly wasn’t a hit when issued as a 45 in 1973. It remains Voices Of East Harlem’s most memorable and enduring record, beloved of both Northern and Modern soul fans. Also worth singling out for praise is the funky ‘Wanted Dead Or Alive’ – a bonafide rare groove classic – and ‘Little People,’ a blaxploitation-style cut with layered, contrapuntal vocals, framed by cinematic orchestration, which ride on a funky backbeat.

The group’s sophomore outing for Just Sunshine was 1974’s ‘Can You Feel It,’ which retained the services of Leroy Hutson. Though it lacked  an out-and-out killer cut in the shape of ‘Cashing In,’ it nevertheless proved a solid set with plenty of good moments and starts off in fine style with the opening funkafied title cut, co-authored by Hutson (and which is stylistically similar to the music that he was producing for Curtom during the same timeframe). Also memorable is ‘Jimmy Joe Lee,’ a slice of storytelling filmic funk but even better is the gentle, soul-infused, groover ‘Rare So Rare,’ which features Berneice Cole’s plaintive vocal and also has some deft jazzy touches. Also listen out for the soulful, dance groove, ‘Take A Stand’ (which is also available from Soul Brother on a 7-inch vinyl single together with ‘Cashing In’). It’s driven by a pulsing bass line and characterised by a passionate female lead vocal. There’s also the Voices’ version of the Hutson co-written tune, ‘March Across The Land,’ which Linda Clifford recorded as a 45 B-side for Paramount in 1973.

Sadly, Voices Of East Harlem didn’t make any more LPs after ‘Can You Feel It,’ and faded into obscurity. These two albums, which haven’t been available on CD for a couple of decades, are undoubtedly their best recordings and having them together on a handy twofer is a great way to appreciate the Harlem ensemble’s super-soulful work. If you’re a dedicated fan of ’70s soul, put this double reissue at the top of your wants list.