VIVIAN REED: ‘Yours Until Tomorrow – The Epic Years’ (SoulMusic Records) 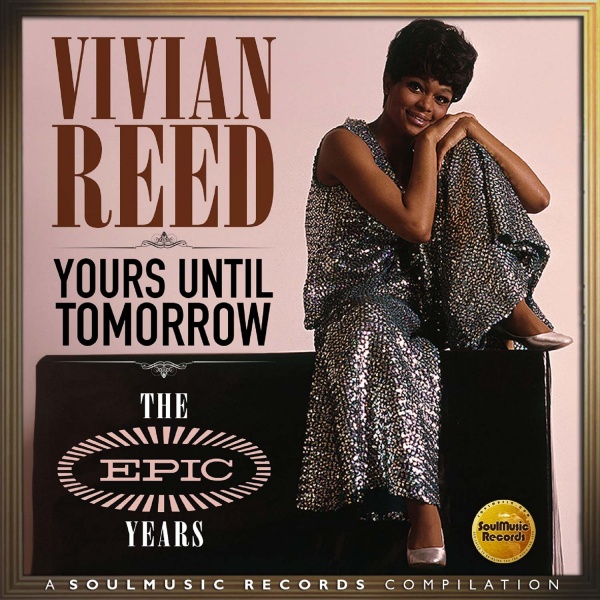 Pittsburgh singer, Vivian Reed, is a familiar name, perhaps, to avid music theatre goers in the USA, where her stage performances on Broadway (in acclaimed shows like Bubbling Brown Sugar) have received Tony nominations and garnered her a clutch of awards over the years. Less well-known is Ms Reed’s career as a recording artist, which began in the late-1960s at Epic Records, when she was signed by the legendary A&R man, John Hammond, among whose ‘discoveries’ were Billie Holiday, Bob Dylan and Aretha Franklin. Long forgotten – except by the most devoted of her fans – and out of print, Vivian Reed’s eponymous LP for Epic is now reissued in full for the first time alongside a clutch of non-album 45s and their B-sides in this new 20-track Soul Music Records compilation.

Reared on a strict diet of classical music, which led her to study at New York’s prestigious Juilliard School of Music, Reed, who gave her first concert when she was 13, had to be schooled on how to sing in R&B and pop styles and certainly, listening to some of the tracks on this collection, she doesn’t come across as a natural soul singer. Though note-wise she’s pitch-perfect, her performances exhibit a sense of emotional control and restraint that you wouldn’t get with someone like Aretha Franklin. But that’s not a bad thing and certainly helps to distinguish Reed’s distinctive style, which is reminiscent, perhaps – certainly in terms of its rich, expressive, contralto tone –  of Dee Dee Warwick (Interestingly, this compilation’s title song, ‘Yours Until Tomorrow,’ was first recorded by Warwick, though Reed’s version charted at #44 in the US R&B charts and proved to be her biggest hit).

The stylistically-varied material that graced Reed’s Epic album – ranging from a cover of the Righteous Brothers’ ‘You’ve Lost That Lovin’ Feeling’ to Leonard Bernstein’s dramatic West Side Story showstopper, ‘Somewhere’ – revealed the singer to be a versatile performer who was comfortable in a range of settings. Some of the non-album singles for Epic from the early ’70s highlight facets of Reed’s musical personality that the earlier album didn’t explore – such as the blues-drenched and dramatic ‘Unbelievable’ and two eminently soulful sides – ‘Lean On Me’ and ‘Missing You’ – the latter both written and produced by Van McCoy and Joe Cobb (Aretha Franklin later cut ‘Lean On Me’ as B-side and then Melba Moore scored a hit with it). Reed moved into singer-songwriter pop/rock territory with her final Epic 45, a soulful, energetic retooling of Carole King’s ‘I Feel The Earth Move,’ produced by Richard Perry, who would go on to helm hits for the Pointer Sisters. It caps off a fine collection that illuminates the largely forgotten and overlooked years of a singer whose underappreciated recordings deserve wider exposure.