VICTOR HAYNES: Take It To The Top (Expansion) 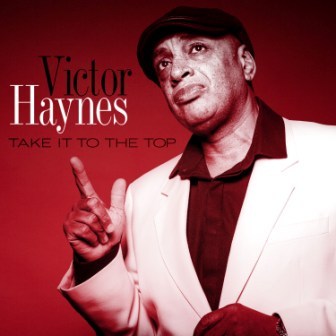 Over the years UK soul singer Victor Haynes has released plenty of choice soul and he’s always in demand for live shows and sessions. He has a loyal following amongst the UK soul cognoscenti and this new 13 tracker will do his reputation no harm at all. Indeed his loyal fans will lap it up and if mainstream stations (like Radio 2 and Jazz FM) get onto it, ‘Take It To The Top’ might be the one to break Vic with a wider audience. And why shouldn’t mainstream radio take a punt? Most of the tracks here are easy-on-the-ear and radio friendly and would fit admirably into most playlists.

Take the track that first heralded the album … ‘Hopping, Skipping, So In Love’ first appeared on Expansion’s ‘Luxury Soul’ CD and it won a great response. At risk of repetition it is easy-on-the-ear and radio friendly…. great melody, catchy hooks, soulfully sung and lavishly produced… as good as anything you’re e liable to hear on any radio station. And this album has plenty more to offer. In fact the opening six tracks are crafted from the same template as ‘Hopping, Skipping, So In Love’…. lovingly produced Brit soul dancers – with those sweet melodies and hooks that we’ve just described.

The second half of this album is a little different. Not experimental, but on things like the meandering ‘Who Do You Love’, the lithe Latin dancer ‘Help Me Feel The Sun’ and the obviously jazzy ‘Jazz Street’ Victor takes a few more chances. Those two musical halves are divided by the album’s real highlight, ‘My Sweetest Temptation’ – a beautiful, mid-tempo swayer that not only references the Temptations in the title but also in its music and lyrics … “sunshine on a rainy day” etc. Then there’s the falsetto hook – quite lovely.

Add to all that a pair of gorgeous quiet storm ballads – ‘Tapestry Of Love’ and ‘Giving All My Love To You’ and ‘Take It To The Top’ shapes up to become Victor’s best and most complete long player and with the right exposure it could just be the one to allow him to crossover… no one deserves it more!