VICTOR HAYNES: ‘From The Bottom Of My Heart’ (Expansion) 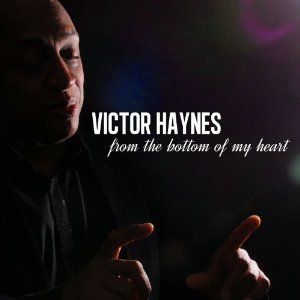 Smooth-voiced Manchester-based soul man, Victor Haynes, has a long association with Expansion Records – in fact, he has the distinction of being the first British singer to release an album on the label in the shape of 1994’s ‘Optimistic.’ Eighteen years on and Haynes returns with a new solo venture for Richard Searling and Ralph Tee’s revered indie soul imprint. As with his previous work, it features a substantial input from Hayne’s long-time songwriting partner, keyboardist, arranger and co-producer, Pete May. Together they’ve created a tasteful and sophisticated collection of songs (fourteen in all) that will be lapped up by devotees of the Modern Soul scene.

The beats are tight but not too overbearing, the grooves are smooth and the arrangements are tasteful, characterised by lush keyboard shimmers and subtle jazzy inflections. And then, of course, there’s the incomparable Victor Haynes, a man whose voice is a soulful velvety croon and whose pitch-perfect delivery epitomises class.  The set kicks off with the breezy, toe-tapping title cut, which boasts an addictive chorus and passionate vocals from Haynes. Highlights are in plentiful supply – ‘Steppin’ Out’ is a delightful mid-paced four-on-the-floor dance groove that should appeal to aficionados of the Steppers scene; ‘I’m Out Of Your Life’ (the set’s only cover) boasts a similar feel rhythmically but has a moodier vibe; there’s a pleading, poignant quality to the effortlessly fluid dancer, ‘Remembering The Good Times’; the vibe is deeper, darker and jazzier on the reflective ballad, ‘How Am I’; and for a contrast in mood and tempo, the piano-led late-night ballad ‘Can’t Believe’ showcases Haynes’ expressive abilities alongside some tasteful soprano sax warbling from Dean Houston. There’s prominent sax, too – of a tenor variety – on the head-nodding groover, ‘Fallin’.’

Combining strong original material with on-the-money-arrangements and soulful vocals, Victor Haynes has produced a classy album that chimes perfectly with Expansion’s ethos of promoting top-tier, high quality, contemporary soul music.  All in all, an accomplished collection.