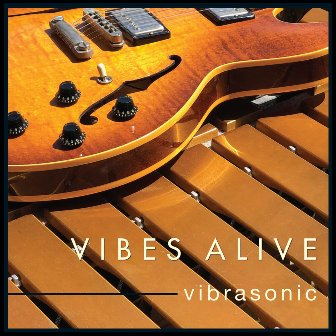 The vibraphone and the guitar have always been key instruments in jazz music… there at the start and a constant in the genre’s evolution. Maestros on the instruments are numerous and vibes and guitar led albums have been ever presents on the jazz charts and at award shindigs. However, I’m not aware of too many albums where vibes and guitar are used as dual lead instruments… twin strikers, if you would. Then I’ve never come across Vibes Alive… a dynamic duo who have just released a third album of jazz grooves where their respective talents … the vibraphone of Dirk Richter and the guitar of Randall Crissman share the limelight; neither dominating the other but rather the one respecting and complementing the other. Helping here are garlanded keyboardist Jeff Lorber, drummer Vinnie Colaiuta, bassist Jimmy Johnson and Luis Conte on percussion. With such a team behind them you’d expect some classy, soul and funk fuelled Vibes Alive jazz grooves and that’s just what you get.

Maybe that sound is best typified by this album’s title track… an invigorating sweep… little wonder when released as a single it earned Most Added status on the Billboard singles chart. There’s more of the same soul-jazz flavour on the set’s opener, ‘Sweet Vibes – which features a sweet hook. The LP’s focus downtime moment is ‘Windchime’ with Richter’s crystalline vibes playing the part of the windchime. ‘Waterfall’ is chilled too; here Crissman switches to acoustic nylon string guitar to evoke a flavour of Earl Klugh. The marquee duo however don’t dominate proceedings. They are prepared to let the other players have their moments in the sun… notably Jeff Lorber. His piano is a highlight of ‘Going Home’ while Colaiuta, Johnson and Conte offer sympathetic support –as they do throughout the concise ten tracker.

Lockdown notwithstanding, we believe that ‘Vibrasonic’ is available now.