VENUE CONNECTION: Fire It Up (Keepin’ The Groove 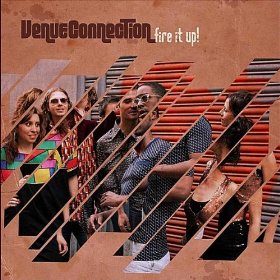 Mainstream soul fans were first introduced to Spanish band, Venue Connection via tracks on a couple of Soul Unsigned compilations. The tunes – ‘Madrid Boogie’ and ‘Walking Your Dream’ -revealed an outfit who knew how to recreate the authentic late 70s jazz-funk soul sound. Founded in 2002 in North East Spain by two committed soul freaks – Javier del Aguila and Fara Alvarez – Venue Connection now work out of Madrid and with twin strikers Karl Frierson and Angeles Dorrio on lead vocals they really do hit the spot.

‘Fire It Up’ is the outfit’s third full album and if you’re tired of formularised, sterile tunes that masquerade as soul, then the live, full-on, organic sounds of Venue Connection are well worth investigating. The set opens strongly with the rolling bass lines of the LP’s title cut. It’s a real chunky old school groove that should recall prime time Brand New Heavies. There’s more of the same on ‘How Does It Feel’ – though this has a lighter, feminine air about it courtesy of Angeles Dorrio’s vocals. She leads too on the Latin-tinged ‘La Cala’ and the pacey ‘Let’s Dance’ which veers towards soulful house territory. It doesn’t quite get there because it possesses a live feel to it which even the best of that genre always lacks. The set also boasts some decent attempts at funk and a trio of jazz-based instrumentals of which ‘Do Your Thang’ is enlivened by some scat vocals. Weakest cut on the album is the ill-advised ‘Besame Sol’. It’s a kind of rap with a semi-sung chorus – though the clichéd words are more spoken than rapped. It doesn’t work and is sadly out of kilter with the rest of the album.

If you want to find out more go to www.venueconnection.com and there’s the opportunity to buy @ http://itunes.apple.com/gb/album/fire-it-up/id464889812?uo=4