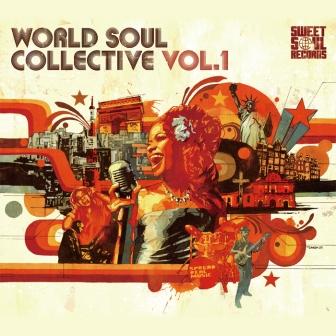 Japan’s Sweet Soul Records has a clear and well-defined mission statement. Log onto their excellent web site and you’ll be able to delve at length into their philosophy. In essence, though, the label people see their imprint as a “ticket to the soul world”. They aim to create an artist platform that not only includes CD production, but media creation, music cafes, and real soul music, allowing artists to play a greater role in spreading real music. The first stage in that crusade was to try and re-establish soul’s popularity in Japan. To that end Sweet Soul Records issued a series of quality compilations which featured new versions of old soul classics delivered by a team of top Japanese musicians and singers (check our review archive for details of these releases).

Now Sweet Soul is set to move to the next stage with the first in a “World Soul” series. Here label bosses have collected 17 cuts (some new, some a few years old) from independent, global soul artists from across a range of genres and for sure it’s a diverse collection… but what brings a unity of sorts is the fact that all the music has an organic, live feel… what the Sweet Soul people call “real music”.

The predominant flavour is nu or neo soul. ‘Morning Glow’ from NT Jam Rosie, ‘Don’t Rush’ from Amber Ojeda, ‘Until Now’ from Paris Toon and ‘Gotta Be Me’ from Innopshere are all built on those shifting, slinky, laid back grooves that define the best of neo-soul… cream of this bunch though is the Jill Scott-flavoured ‘Trouble’ from Sacha Vee. Those who like their soul a little beatier will enjoy stuff like Jeremy James’ ‘Imagine’ and the R Kelly-influenced ‘Take Me As I Am’ from Shirma Rouse. Watch out too for Mr President’s ‘The Best Is Yet To Come’ – conga-driven and with an intricate brass riff, it clearly owes a lot to ‘Move On Up,’ while ‘2 Of A Kind’ from Weeland and the Urban Soul Collective was always the best cut on their own LP from a year or two back. Most interesting cut though is ‘Food For Thought’ from Song. It features typically laid back rhymes from Guru (one of his last recordings before his premature death in 2010), some wonderful trumpet and it’s devilishly catchy. That leaves the cut that Sweet Soul are probably proudest of – ‘Make The Change’ by Japan’s Nao Yoshioka. The neo-soul confection is the first all-original music recorded by the label…. big oaks/little acorns and all that. Find out more about this album and the Sweet Soul philosophy by going to www.sweetsoulrecords.com