VARIOUS: Whatever You Want (Kent) 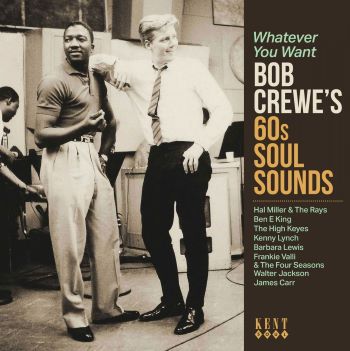 Kent’s newest compilation, ‘Whatever You Want’ is a 24 track tribute to the  craft of US songwriter and producer Bob Crewe. To many, Crewe is best remembered for his work with the Four Seasons. Others will know he crafted Northern soul favourites for Mitch Ryder and  the Detroit Wheels while perhaps his biggest hit song has been 1974’s ‘Lady Marmalade’.

In the 60s, though, while still working with the Four Seasons and Mitch Ryder, Crewe worked extensively with all kinds of artists both as a freelance writer/producer and via his own New Voice and Dynovoice labels and here Kent have collected together 24 Crewe artefacts from that era , all with a soulful  bent.

Not surprisingly there’s input from the Four Seasons and Mitch Ryder. The Seasons’ track is the poppy, pacey ‘I’m Gonna Change’ from 1967 while you can enjoy (again) Mitch Ryder’s perennial ‘You Get Your Kicks’. There’s also a Frankie Valli solo track – the jaunty, hook laden ‘(You’re Gonna) Hurt Yourself’. In between there are plenty more properly soulful gems like Jerry Butler’s ‘Whatever You Want’, Ben E King’s ‘The Beginning Of Time’, James Carr’s ‘Sock It To Me Baby’, Chuck Jackson’s ‘Another Day’, Dee Dee Sharp’s ‘Deep Dark Secret’ and Barbara Lewis’ ‘Pushin’ A Good Thing Too Far’.

As always with  Kent compilations there are plenty of rarities, lesser known items and left fielders. Perhaps  the most intriguing is the closing track, the instrumental ‘3 Minutes Heavy’ credited to the “Time Keepers”. It  sounds like a tarted up version of ‘Jenny Take a Ride’ (which it is!). Featured artists you may not be aware of include Tracey Dey, Hal Miller, Lynne Randell and Billie Dearborn while it’s good to see a couple of Brit sourced tracks too – Kenny Lynch’s ‘My Own Two Feet’ and dear Kiki Dee with ‘I’m Going Out The Same Way I Came In’. British, American, big name or relative unknown – what all these artists  knew was that with a Bob Crewe production and/or song (often co-authored with Bob Gaudio and/or Charles Calello) they were working with quality.

For most of his career and for obvious reasons Bob Crewe hid his sexuality. In later life (Crewe died in 2014) he came out as gay and he went on to set up the Bob Crewe Foundation which has donated over $3m to all sorts of great causes – a wonderful, concrete legacy; his musical legacy is celebrated here!