VARIOUS: We Got A Sweet Thing Going On 2 (Soul Junction) 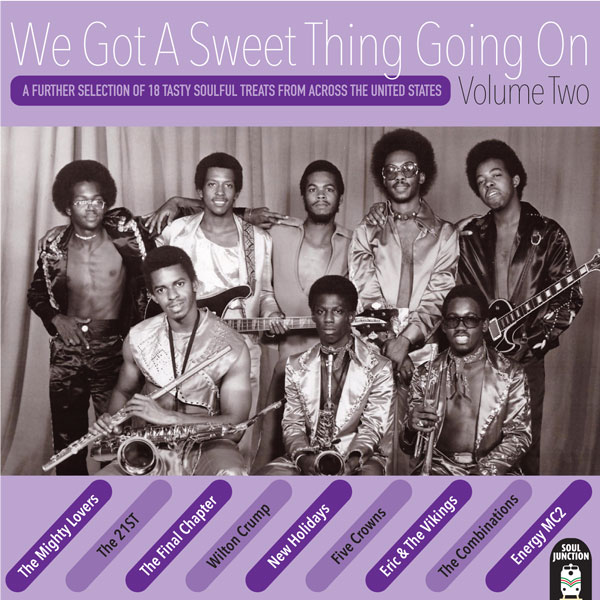 The small but perfectly formed Soul Junction Records is rightly renowned for its output of classy, in-demand, rare and collectable 7″ vinyl reissues. From time to time though the gang down in the West Midlands do issue CD albums, which are eagerly snapped up by discerning collectors. Said collectors therefore will be delighted to know that Soul Junction has just issued a brand new CD collection… the second volume of ‘We Got A Sweet Thing Going On’.

The album offers a generous 18 tracks with the emphasis on the group harmony sound. Though there are some exceptions… ‘Merry Go Round Of Love’ for instance is an instrumental (from Milwaukee’s The Final Chapter) while Wilton Crump is quite clearly a solo artist, not a group. He gets two tracks (both sides of his solitary Olive Branch Records single) and both ‘Give Your Love To Me’ and ‘Think It Through’ (sweet ballads, both) are very much of the group harmony tradition. Crump had been both MD and lead singer with the Spaniels and his one stab at solo success was recorded in Chicago (the rhythm at Chess and the vocals at Curtom).

The lion’s share of the cuts here though emanate from Detroit. There are three cuts from Popcorn Wylie’s Soul Hawk label, three too from Detroit group The 21st and one from a band called Energy MC2. Their offering is a lovely, sweet soul ballad, ‘Julianne’. Amongst those Wylie productions are the million selling ‘Vibrations’ from Eric and the Vikings and the now in-demand ‘Maybe So Maybe Not’ from the New Holidays. Both are almost perfect artefacts of that appealing group harmony ballad sound.

A little more up-tempo is the wonderful ‘I’m Gonna Make You Love Me’ from Atlanta’s The Combinations. It’s not the famous Jerry Ross song, rather a gentle dancer with sweet, sweet harmonies. The Combinations, by the way, morphed into The MVPs who had a huge Northern hit with ‘Turing My Heart Beat Up’.

The exhaustive sleeve notes give you all the information you’ll ever need and it goes without saying that if you’re a collector of classic indie soul or a lover of sweet soul harmonies, investigation here is essential.