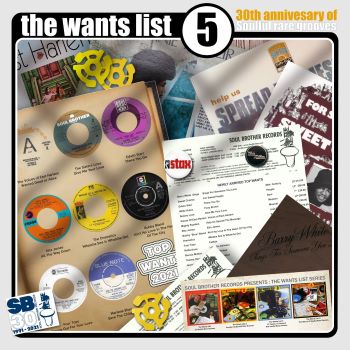 London’s Soul Brother Record store is a bulwark of the UK soul scene. Now based in Putney and run by the knowledgeable Pragnell brothers (Laurence and Malcolm), the shop has been serving the soul community for 30 years and to celebrate the milestone, Soul Brother has just released one of their acclaimed ‘Wants List’ compilations. This new iteration is the 5th in the series and compiled by Laurence, the 18 tracker maintains the soulful quality of the previous four editions.

The aim of the ‘Wants List’ series is to highlight great, in demand soulful ‘Rare Groove’ tracks that aren’t too easily available. The sorts of tunes that people had heard and loved but couldn’t get hold of without paying big bucks. They were, if you like, on collectors’ “wants lists”.

All the tracks on ‘Wants List 5’ come from the 70s but still sound vital. Indeed, someone has worked out that collectively the music here has amassed over 30 million views/listens on You Tube – testifying to their quality and longevity.

As with the first four volumes the music here includes well known tracks from “name” artists alongside a lesser known items from soul wannabees. Amongst the heavy hitters are the Four Tops, Edwin Starr, Marlena Shaw. Ronnie Mc Neir, Bobby Bland, the Dramatics, Etta James and Barry White whose ‘Playing Your Game Baby’ kicks off proceedings. From 1977, this wasn’t one of White’s most commercially successful tracks, but over the years it’s become revered by the proper soul crowd. The Tops’ song, by the way, is ‘Strung Out On Your Love’ taken from their under appreciated ABC period. And while we’re talking top harmony groups, who doesn’t love the Dramatics’’ Whatcha See Is Whatcha Get’ – one of those tunes that’s guaranteed to bring a smile to any proper soul fan.

Amongst the lesser-known items is Sweet Charles’ catchy ‘Yes, It’s You’. Charles (Sherrell) was James Brown’s band leader for almost 20 years and the Godfather produced this track which has become something of a rare groove anthem. Ditto, ‘Evil Vibrations’ from the oddly named Mighty Ryeders. Sampled by De La soul, this funky shuffle comes from the band’s 1978 ultra-rare ‘Help Us Spread The Message’ album which you’ll see on sales sites going for over £500! And that’s the beauty of the whole ‘Wants List’ series. The ultra-rare line up alongside the more accessible and big names like Willie Hutch sit cheek by jowl with lesser luminaries like Penny Goodwin and Jeannie Reynolds. What brings the unity is the soulful quality of the material and performances!

30 years down the road, Soul Brother have sold countless records but importantly have also issued something like 150 albums and 50 singles on their own label. Amongst that output are 20 various artists compilations and ‘Wants List 5’  is right up there with their very best. Here’s to the next 30 years, boys! Keep up the great work!