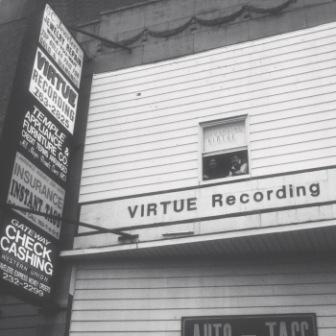 Most soul collectors know how important Philadelphia is/was in soul’s evolution; said soul collectors can probably reel off all the big names and labels associated with the City of Brotherly Love, but it’s my contention that it’s only the really serious Philly soul buffs who’ll be able to tell you about the city’s Virtue Records. The label and its associated studio were set up in 1962 by Frank Virtue, who joined the crazy music biz after his release from the service in 1947. A talented guitarist, he formed the Virtuoso Trio who later morphed into the Virtues. The band enjoyed a 1958 hit with ‘Guitar Boogie Shuffle’ and with the profits he set up a studio and label. The studio located at 1618 North Broad Street, was used by Virtue’s own artists and by anybody else who could afford $500 to cut their own 45… two songs of your very own which you could either issue yourself or lease to the Virtue label. Amongst the top tunes cut at Virtue’s decidedly lo-fi facility are Cliff Nobles’ ‘The Horse’ and Fantastic Johnny C’s ‘Boogaloo Down Broadway’.

As has become the way with rare labels, Virtue recordings are now eminently collectable and to oblige, Germany’s Tramp label has just issued this lovely 21 tracker that collects together an eclectic selection of tunes cut at Virtue.

Because these are Philadelphia recordings, you can be sure that are plenty of sweet soul ballads and dancers that echo the sound of, say, the Intruders in the early/mid 60s. Amongst the best are Gene Faith’s ‘When My Ship Comes In’, the RDM Band’s ‘Give Up’ and The Creations’ Take These Memories’ which features a typical Philly falsetto lead. In truth, they’re a little rougher and readier than the more polished work of Gamble and Huff, but none the worse for that.

The album also features a number of tough funk cuts – things like Bob Marshall’s ‘Big Ladies Man’ while Richard Rome (a name familiar with Philly experts) offers a bizarre instrumental ‘Ghost A Go Go’ – part soul/jazz, part Northern soul…. very strange but it kind of works. Yes, this fine collection proves what proper Philly collectors know; that there was a whole lot more to Philadelphia soul than the glossy, sweet and smooth oeuvre of Gamble and Huff.

Released on 5th May, this album is absolutely essential for all Philly soul folk!