VARIOUS: ‘Verve: The Sound Of America – The Singles Collection’ (Verve/Universal) 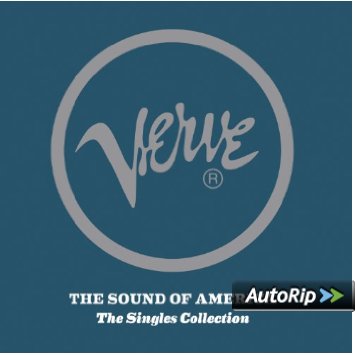 To accompany Richard Havers’ lavishly illustrated history of the iconic jazz label, Verve – set up in 1956 by entrepreneur-turned-producer, Norman Granz, primarily as a vehicle for his star protégé Ella Fitzgerald – is this new 5-CD box set. Curated by Havers, who also wrote the liner notes, the set chronicles the label’s fortunes via one hundred singles that it released. This is an unusual approach because jazz, of course, is usually regarded as an album-centric musical genre – but Verve was a label that (in the ’60s especially, when it was owned by MGM and visionary producer Creed Taylor took the helm) began to penetrate the US pop charts with some of its releases on 45s.

The first track on CD 1 takes us back to 1947 – at that time the concept of Verve wasn’t on Norman Granz’s radar and wouldn’t be born for another eight years. It was a time when, as a tenacious and far-sighted entrepreneur, Granz revolutionised the image and marketing of jazz by taking it from the nightclub to the concert hall. He also began a record company, Clef, ostensibly to document his groundbreaking ‘Jazz At The Philharmonic’ ventures but, as this set illustrates, he also signed some of the cutting edge acts in modern jazz including beboppers Charlie Parker and Slim Gaillard. It was Granz, in fact, who masterminded Parker’s album session with a string orchestra in 1950 and from which the 10-inch 78rpm single ‘Just Friends’ was extracted. It’s a key track on the first CD (spanning 1947-1956) which traces Granz’s far-from-tentative steps in the record business. Other great singles on the Clef label – and included here are Johnny Hodges’ ‘Castle Rock’ and Billie Holiday’s ‘You Go To My Head.’ Granz began another label – a sister to Clef – called Norgran in the early ’50s and some of its releases are also featured on CD1, including ‘Tenderly’ by Ben Webster and ‘I Can’t Get Started’ by trumpeter Dizzy Gillespie.

CD2 (titled ‘Stairway To The Stars’) covers the first year in the life of Verve Records (1956-1957) and is packed with a slew of great performances – ranging from Ella Fitzgerald’s ‘Manhattan’ (one of six Ella cuts on this particular disc) and Billie Holiday’s eerie anti-lynching ode ‘Strange Fruit’ to oddities like Fred Astaire’s ‘Hello Baby’ and Bing Crosby’s ‘Mountain Greenery.’ There’s plenty of great instrumental jazz, too, from Oscar Peterson, Dizzy Gillespie, Woody Herman, Teddy Wilson and Gene Krupa.

‘Bossa Nova 1958-1963’ is the title given to the third CD in the set and reflects a time when jazz’s popularity was diminishing due to the remorseless rise of pop and rock and roll. It was also the time when the 45 rpm single was king and not to be left out, Verve released a welter of commercial-oriented jazz cuts as singles. The rise of the Brazilian bossa nova sound in the early ’60s reinvigorated the jazz scene and Verve was the first US label to capitalise on the bossa boom. Stan Getz and Charlie Byrd’s landmark ‘Jazz Samba’ LP yielded a smash hit single in the shape of ‘Desafinado.’ Another significant collaboration by Getz (with Brazilian bossa nova architect, Joao Gilberto) resulted in Verve’s biggest hit single, ‘The Girl From Ipanema,’ featuring fragile-voiced chanteuse, Astrud Gilberto. The landmark song – which launched a thousand bossa novas and made Gilberto a star – is present on the set’s fourth CD, ‘Goldfinger,’ and includes rare, commercial-oriented singles by ex-Miles Davis pianists Bill Evans and Wynton Kelly as well as some soul-soaked grooves by organist Jimmy Smith.

Hammond hero Smith experienced the most commercial phase of his career at Verve (he was the label’s biggest hit-maker and scored nine US pop smashes, all included on this collection) and also features on this retrospective’s fifth and final CD, ‘Bumpin’ On Sunset,’ along with the great guitarist Wes Montgomery, Willie Bobo – his infectious Latin groover, ‘Spanish Grease,’ is one of the disc’s standout cuts – Lalo Schifrin, Don Sebesky and Kenny Burrell. The inclusion of one relatively recent recording, Diana Krall’s 2001 take on Bacharach & David’s ‘The Look Of Love,’ might seem incongruous to some observers but it rounds off the collection nicely and brings the Verve story up to date while Richard Havers’ liner note commentary places the music in its relevant historical context.