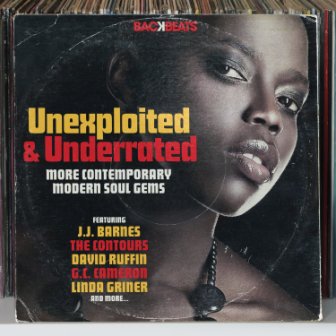 This great little 18 track long player is one of six new Backbeats compilations and, retailing at just under a fiver, it really is worth seeking out! The reason is in the title – all the music here does rate those two adjectives “unexploited and underrated” … everything is rare, collectable and honestly soulful…. a rarity in the soul compilations stakes these days. What’s odd about the set though is the honesty (or rather lack of it) in the sleeve notes and the accompanying brief annotations. You see, everything here comes from the back catalogue of Ian Levine’s Motor City label. Levine, for those of you who aren’t aware of him, was a major player in the early days of Northern soul and (from a privileged and wealthy background) he set about acquiring everything Motown had ever released… this was in the days of limited release schedules, remember. Anyway, cutting to the chase, Levine did get hold of untold Motown rarities and in the process got to know most of the Motown artists and he especially forged friendships with those whose experiences with Gordy weren’t that great – Motown second stringers we might call them. In the 80s and 90s he took many of these disillusioned artists into the studio and got them to re-record some of their hits – along with new tunes that he penned for them…. many based loosely on old soul tunes. When the music was released it was poorly received and critically panned but, as we know, time plays all kinds of tricks, and now Levine productions are held in high esteem and quite collectable… and you can enjoy many of the best here… though, as we said up top, the sleeve notes don’t really make all this clear – implying some kind of more “genuine” soul provenance.

That, though, is all by the by – what counts is the quality of the music and that quality here is remarkably high. What in the 80s sounded contrived, derivative… almost synthetic, now has real soulful appeal… mind you when you’re talking about voices like David Ruffin, JJ Barnes, Bettye Lavette, Barbara Randolph, G C Cameron and the Originals it couldn’t really be anything less, could it? There are lots of high spots here – but you’ll need to go some distance this year to find a better reissue than ‘Back In Circulation’ from “Sweet” James Epps of the Fantastic Four. It’s six minutes plus of modern soul heaven and is well worth the fiver the album can be bought for. Another outstanding cut is ‘Got To Win You Back’ from the Contours. Based loosely on the Spinners’ ‘I’ll Be Around’ it’s as far from the rough-hewn sounds of ‘Do You Love Me’ than you could ever get.

Interestingly, alongside the old Motown stars there’s Levine-produced cuts from UK stars like Noel McKoy, Angie Gold and Ebony Alleyne… odd, yes, but adding to the huge appeal of the set.