VARIOUS: Trip To The Moon (Tramp) 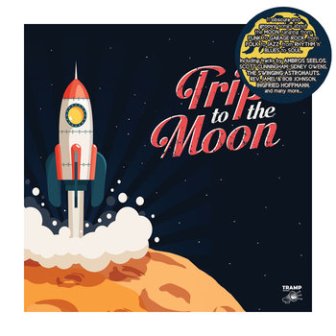 It’s probably not escaped your attention, but its fifty years since Neil Armstrong walked on the moon and the occasion is being celebrated and commemorated in all kinds of ways. But I’ll wager that there is no stranger commemoration than this bizarre and esoteric compilation from German niche label, Tramp. Tramp is known for its left field esotericism. The Tramp team are inveterate crate diggers and they always come up with stuff that’s obscure and rare and here, on this 13 tracker, they’ve come up with the obscurest of the obscure! What holds it all together is the “moon” concept – be it the artists’ names (e.g. the Moon Dawgs) or the tune titles (e.g. ‘Full Moon’, ‘Voyage To The Moon’ etc) or in one case, both –the Swinging Astronauts’ ‘Crazy Stockings On The Moon’.

That one kicks things off and its rough and tough vintage R&B and there’s plenty more of the same. There’s also some crazy funk – try Rev James and Bob Johnson’s ‘Walking On The Moon’, which despite its funky sound, asks the pertinent question why spend billions on moon shots when people are starving?

The Tramp people tell us that the LP’s raison d’être is to fund a rescue mission for an African astronaut stranded on the moon (you may have seen the internet spoof) – a great cause for sure! Really though, it’s to commemorate that one giant leap for mankind and if you want the oddest memento, this album is out on July 19th. It comes as a 12 track vinyl LP, a 13 track CD and in digital. Most of the songs are released for the very first time!