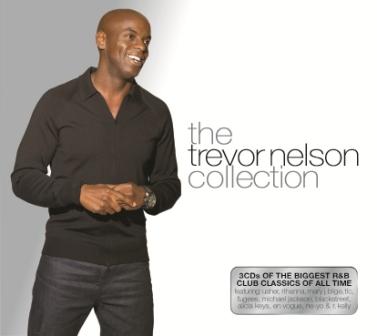 This triple CD, 60 track compilation is the first big, block busting soul/R&B/urban collection of the year and I doubt that over the next 300 or so days there’ll be a better one released. Why? Well, it offers a huge, memory-jerking sweep of all the big, big releases of the last 30 years … and, what’s more, it’s been assembled by the most authoritative voice on the UK scene for most of that period. Yes – Trevor Nelson’s back doing what he does best. Over the last few years he has diversified somewhat. He’s popped up all, over the place – game shows, travel programmes and so on and on a few occasions, sadly, he’s not covered himself in too much glory. He was, for instance, panned for his commentary at the Olympic Opening Ceremony; so whether he’s smarting over barbs like the one that likened him to a not very good ventriloquist’s dummy we’ll never know – but here he hits back with a splendid collection that maybe proves the old adage about trying to be a jack-of-all-trades. Just stick to what you know and what you’re good at and you can’t go wrong… exactly what TN’s doing here.

Dip in anywhere here and hear top-notch music from the likes of Luther Vandross, Michael Jackson, Mary J Blige, Mariah Carey, Usher, R Kelly, Alicia Keys and many, many more. Those big, familiar tunes (‘Never Too Much’, ‘Rock With You’, ‘Real Love’, ‘Fantasy’, ‘U Remind Me’, ‘Ignition’ and ‘No One’) are tempered with lesser known gems from artists like Blu Cantrell, Tweet, 702, 112, Adina Howard and Jaheim. And in between there’s classics from the likes of The Sounds Of Blackness, Anthony Hamilton, Lucy Pearl, Sunshine Anderson, Alexander O’Neal and Faith Evans. Lots too for the “oldies” (Guy, Ralph Tresvant, Bobby Brown) and plenty of newcomers as well (Aloe Blac, Taio Cruz, Rhianna). Trevor’s not forgotten the contribution of the UK contingent either. They’re represented by people like the Brand New Heavies, Craig David and Mark Morrison. So, yes, a comprehensive survey and though most self-respecting soul and R&B people will have all these tunes somewhere in their collections, it’s hugely satisfying to have ’em all together like this.