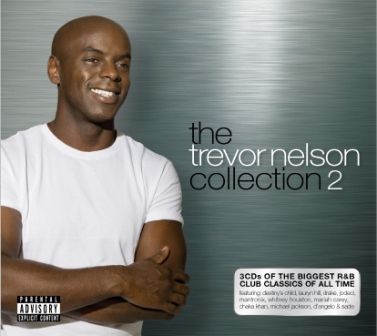 Though he’s diversified into all kinds of areas, Trevor Nelson’s still a soul boy at heart and to prove it, last year he put together a great soul and R&B compilation for Sony Music that – because of its excellence- went on to become one of 2013’s bestselling albums. Little wonder then that the label asked Trev to repeat the formula… et voila, it’s here – a second helping of top flight soul and R&B from the 80s right up to the present day.

This new “Collection” offers 60 tracks across three CDs and though unity’s achieved by the collective excellence, the individual CDs have their own distinct flavour. CD 1 we could call “old school”. It features 20 great oldies –many that went onto become (and indeed remain) Soul Weekender classics –stuff like George Benson’s ‘Give Me The Night’, The Gap Band’s ‘Outstanding’ and Gwen Guthrie’s ‘All This Love That I’m Giving’ and ‘Aint Nothing Goin’ On But The Rent’. Good too to see Oliver Cheatham’s ‘Saturday Night’ in there. Oliver, of course, was a star who passed in 2013 and good to see him getting the respect here.

CD 2 – though not contemporary – is a touch more modern and veers towards heavier R&B favours garnished with classic neo/nu soul from D’Angelo, Lauryn Hill and Erykah Badu. Maxwell’s anthem ‘Ascension’ is in there too while Finley Quaye and Jamiroquai add variety while flying the UK flag. The set’s third CD is varied too and contains the most up to date material – like Drake’s ‘Hold On We’re Goin’ Home’ and Miguel’s ‘Adorn’. Plenty of great oldies too from people like Missy Elliott, Toni Braxton, Next, R Kelly, Jagged Edge and dear old Michael Jackson; his contribution is the wonderful and oft neglected ‘You Rock My World’. What a great tune… and in essence that’s the appeal of this album. Trevor’s dug up loads and loads of great stuff that we know and respect…. but maybe we now tend to neglect ; here he gives us the opportunity to love them anew!