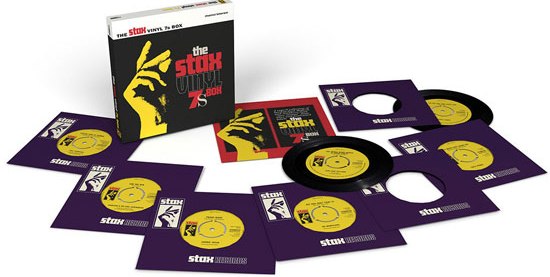 The legendary STAX label is celebrating its 60th anniversary. You may have caught the recent BBC Prom concert to mark the date and also to commemorate things Concord/UMC are all set to release one of their fabulous 7″ singles box sets…. the kind of thing that they’ve done so well with Motown, Stateside and Chess.

As with those previous boxes this new Stax collection offers seven, 7″ vinyl singles selected from the archive by Richard Searling. Now knowing where Richard is coming from (his roots are in Northern soul… he was one of the original Wigan Casino jocks remember) don’t expect what for want of a better description we might call “classic Memphis smouldering, tough, brassy, funky southern soul”. Rather what we get is a different kind of Stax, the smoother, more “uptown” sounds that were popular on the Northern circuit. That, of course, doesn’t make them any less soulful or worthy… witness two fab examples – JJ Barnes’ ‘Sweet Sherry’ and Darrell Banks’ ‘I’m The One Who Loves You’. Both are superlative soul sounds – never mind what sub-genre you’d allocate them to, if that’s what you like to do.

Barnes and Banks, though obviously “Stax artists” weren’t part of the regular Stax roster. Indeed of the 14 artists here I think we could safely say that only three fit that category…. Johnnie Taylor, William Bell and Carla Thomas. Their respective offerings are ‘Friday Night’, ‘Happy’ and ‘I’ll Never Stop Loving You’. Amongst the other featured artists here are the lovely Barbara Lewis, the Phil Perry-led Montclairs and Margie Joseph. Less well-known, maybe, are Lou Bond, Paul Thompson, John Gary Williams, Roz Ryan, Charlene and the Serenade and Joni Wilson whose offering is a version of the Parliaments’ ‘Let Hurt Put You In The Loser’s Seat’.

Apart from their soulful quality what links the 14 selections together, Richard Searling says, is their collectability. They’re all hugely in-demand. So too are two tunes I’d have like to have seen included ‘Candy’ from the Astors and Collette Kelly’s idiosyncratic ‘City Of Fools’ – maybe they’re lined up for volume 2….here’s hoping! In the meantime enjoy these 14 tunes as they were meant to be enjoyed…. on vinyl. If, however, you want to keep your discs pristine, the box does come with a download code. Great stuff!