VARIOUS: The Sound Of The R&B Hits (Ace) 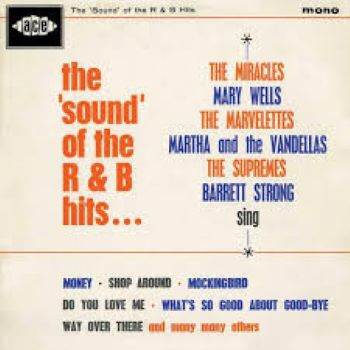 Hot on the heels of the recent, excellent ‘Cellarful Of Motown Volume 5’ (see review below) comes another fine Motown collection from the same magical, early Motown period. This new one, though, ‘The Sound Of R&B Hits’ is a little different. Firstly, none of the 28 tracks are what we’d call “previously unreleased”; secondly, the core of the collection, the first 14 selections, holds a very important place in the history of the Motown sound in the UK.

Motown collectors will know that Berry Gordy’s label(s) had something of a chequered beginning in the early 60s in the UK. Early Motown product was licensed to labels like London American (a Decca subsidiary), Fontana (a Phillips imprint), the indie Oriole and eventually EMI who issued the music on Stateside, before finally deciding to give Motown its own identity, “Tamla Motown”. During that time, the Motown sound became beloved by the mods and, as importantly, plenty of emerging UK bands and singers espoused the sound too – covering Motown songs on record and in concert. It’s well known the Beatles were respectful fans. Factor in the Rolling Stones, the Action, Georgie Fame and many others and it’s easy to see that there was a growing demand for the “magic of Motown” amongst consumers. Consequently, to raise the Motown profile, in May 1964 EMI/Stateside issued a 14-track sampler as a taster, ‘The Sound Of R&B Hits’… the very first UK Motown compilation, and, as we know scores more were to famously follow. Berry Gordy was a big fan of the compilation as a shop window for his material. In 1961 he issued the first US Motown compilation, ‘Tamla Special’ followed in ’62 by ‘Motown Special’. Interestingly both those collections were recently re-packaged and reissued as a “twofer” by Jasmine Records and our Reviews Archive has a full appreciation of it.

Looking back now at the Stateside ‘The Sound Of R&B Hits’, Motown fans will be surprised by many of the selections. Why, for instance, use Mary Wells’ version of ‘Shop Around’ instead of the Miracles’ original and why include Martha and the Vandellas cover of Inez and Charlie Foxx’s ‘Mockingbird’ instead of one of their own originals? I guess marketing men/compilers worked in odd ways back then; many would say they still do!

Nothing wrong with the Ace compliers though! To augment this release, they’ve added a further 14 tracks from the same era. They include cuts like Marvin Gaye’s ‘Can I Get A Witness’ (covered by the Stones), the Miracles ‘You Really Got A Hold On Me’, the Marvelettes’ ‘Please Mr Postman’ (both famously covered by the Fabs) and for the rarity brigade, ‘I Found A Girl’ from the Valadiers (Motown’s first white group).

Interestingly, though many of the 28 tracks on the compilation are totally familiar, not one was a hit in the UK at the time… yes, even the iconic ‘Heatwave’!