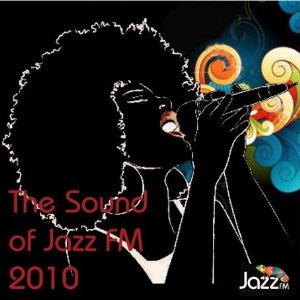 It’s been a year since the last Jazz FM compilation, but the time lag hasn’t meant that the compilers (Ralph Tee, Mike Vitti and Steve Quirk) have thrown away the template, ‘cos this 2010 edition is exactly the same as all the station’s previous compilations sets. Well, obviously, not “exactly” the same – all the music’s different of course – and I don’t mean to use that “exactly” tag in any kind of derogatory sense. What I’m trying to say is that here we have (like all those previous sets) a real quality collection reflecting the music which Jazz FM plays in both its mainstream programming and in its specialist shows. .. i.e. a delicious selection of sophisticated soul and the very best of smooth jazz – old and new, well-known and a little more esoteric.

Of the well-known oldies there’s the Isley’s ‘Harvest For The World’ , Grover Washington Jr’s ‘Tell Me About It Now’, EWF’s ‘Getaway’ ( a special extended remix) and Gladys Knight’s ‘Make Yours A Happy Home’. The less predictable oldies include Boney James’ 1994 Steve Harvey-penned ‘Happy Home’, Dee Dee Bridgewater’s ‘Night Moves’, Glenn Jones’ ‘That Night Mood’ , Locksmith’s ‘Black Jack’ and Dionne Warwick’s 1982 ‘For You’ which underlines what real soul people know – that there’s a lot more to the lovely lady than the Bacharach/David songbook.

The new music on offer duplicates the quality of those oldies and there’s so much good stuff that it’s redundant to talk about standouts – but for starters there’s a great track from the recent Drizabone Soul Family album (‘I Fell Apart’), there’s a left-fielder from Izzi Dunn (‘Nothing But Love’) and fab Latin treatment of the Jackson Sisters ‘I Believe In Miracles’ from the Sunlight Square Latin Combo. Add to those music from (amongst others) Incognito, Jonathan Butler, Eric Roberson, Angela Johnson, The Jazz Steppers, Avery Sunshine and James Day and you’ll know that quality is the compilation’s watch word.

The album also contains a couple of cuts from artists signed exclusively to the Jazz FM label – with albums imminent. First up there’s ‘Let The Sunshine Through’ from Prince Sampson – a gentle swayer of a song with instrumentation that will recall Earl Klugh; then there’s ‘When In Rome’ from Eileen Hunter – which kind of brings together lounge jazz and nu-soul. New and untried, Hunter and Sampson may be but their work’s not out of place amongst that of the more established luminaries.