VARIOUS: The Soul Of The Memphis Boys (Ace) 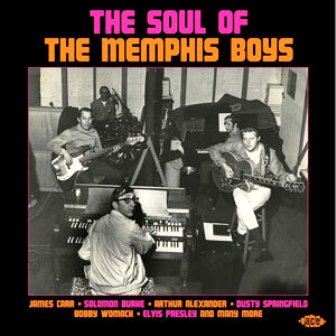 Over the years Ace Records and its Kent subsidiary has made easily available a treasure trove of Southern soul. Via licensing deals with studios/labels like Stax, Goldwax, Hi, FAME and American Sound, they’ve royally served fans of the genre.  For their latest Southern compilation Ace once again turns the focus on American Sound – and more specifically their studio band which became known as the Memphis Boys.

American Sound was founded in 1964 by Chips Moman after he fell out with Jim Stewart of Stax Records. Moman had helped Stax get off the ground, working on classics like William Bell’s ‘You Don’t Miss Your Water’ and Carla Thomas’ ‘Gee Whiz’ but when the guitarist/producer/writer asked for a partnership in the label, Stewart showed him the door! Moman quickly set up a rival studio at Thomas Street, Memphis and experience had taught him the value of a tight, regular studio band, so he set out hiring some of the best players. His core band eventually settled as drummer Gene Chrisman, bassists Tommy Cogbill and Mike Leech, guitarist Reggie Young, pianist Bobby Wood, and organist Bobby Emmons. Over a relatively short period that band (with occasional augmentation) played on records by countless artists across genres who flocked to American to grab a slice of Memphis magic. The stats will tell you that the Boys worked on an amazing 122 chart records in something like four and a half years! Some of those chart records are included in this 24 track tribute to the Memphis Boys, but soul fans, in particular, know that a chart placing doesn’t always mean quality and, vice versa, quality doesn’t always lead to a chart placing. So here, nestling amongst the hits, are B sides, album tracks and non hit singles; but what is obvious is that whatever the Memphis Boys played on with whatever producer for whatever label they always gave their best, crafting a solid, sympathetic soundscape that beautifully enhanced whoever was standing at the studio mic.

Amongst the artists here are big names like Bobby Womack, Solomon Burke, Ben E King, Joe Tex and dear old Dusty Springfield whose offering is her take on Goffin/King’s ‘So Much Love’ which, of course, first appeared on her classic ‘Dusty In Memphis’ album. The lesser known artists number people like Ella Washington, Roscoe Robinson, Roscoe Shelton and West coast girl group, the Blossoms whose Darlene Love fronted ‘Don’t Take Your Love’ is an album highlight. And though this collection is dubbed ‘The SOUL Of The Memphis Boys’ there are inclusions from non soul artists too…. none bigger than a certain Elvis Presley who’s represented by his 1970 hit ‘Kentucky Rain’.

The usual Ace sleeve notes are thorough enough to keep any anorak busy for a week or so and though detail and data are important, music as good as this just speaks for itself…. another wonderful Ace Southern soul set!