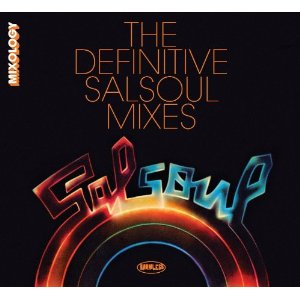 Salsoul is one of the great indie, black music labels. Founded in NYC in 1974 by the Cayre brothers (Joseph, Kenneth and Stanley) it quickly grew to legendary status with its records a key element in the development of disco. To all intents and purposes it ceased to function after 1985 but the evolution of dance music and the numerous disco revivals ensured that Salsoul music was always part of the party scene. The label and its music has countless champions. They number DJs who continually play out the timeless sounds of Salsoul and reissue label execs who regularly release Salsoul material to satisfy the constant demand from old timers and soul seekers new to the label’s infectious sounds.

Ian Dewhirst is fortunate enough to enjoy both roles. He began DJ-ing in the mid 70s and Salsoul sounds were always an integral part of his sets. He went on to found the legendary Mastercuts compilation series and Salsoul collections were amongst his label’s best sellers. The Cayre brothers have just sold their label to the US-based Verse Music Group and pending whatever they chose to do with the Salsoul catalogue, Dewhirst has been allowed one last chance to curate a Salsoul compilation –and this 3-CD, 31 tracker is it.

Dewhirst has tackled the task from the perspective of the club DJ and asked himself what are the classic Salsoul sounds that every decent DJ should have in his box… and he’s come up with what he claims – with some justification – the “definitive” Salsoul compilation. All the big names are here – Double Exposure, Loleatta Holloway, First Choice, Instant Funk, Inner Life and the fabulous Salsoul Orchestra – and all the big tunes – ‘Nice N’ Nasty’, ‘Doctor Love’, ‘Getaway’, ‘Runaway’, ‘The Beat Goes On’, ‘I Got My Mind Made Up’, ‘All About The Paper’, ‘Let No Man Put Asunder’, ‘Ain’t No Mountain High Enough’ and much more. Add to that  rarer items from people like Eddie Holman, Love Committee, Leroy Burgess and Gaz and you can see why I said that there’s a lot of justification for using the adjective ‘definitive’. Moreover, compiler Dewhirst has chosen the very best mixes from people like Frankie Knuckles, Walter Gibbons, Tom Moulton, Shep Pettibone and Larry Levan.

So while Salsoul fans and collectors wait to see what the new owners do with the heritage they’ve acquired, we can all enjoy, once again, the great, joyous sounds of Salsoul… and yes, we have all these tunes somewhere or other… but  here they all are – together, conveniently packaged and annotated in a wonderful triple set.