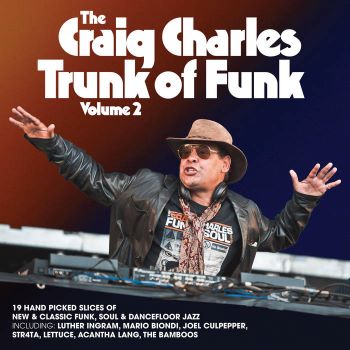 CRAIG CHARLES is a man of many talents… actor, poet, TV presenter and, of course, acclaimed soul and funk DJ. After his spell on Corrie (his character, Lloyd Mullaly, apart from being a taxi driver was also a DJ!), Craig took on more and more DJ responsibility. With a passion for soul and funk (acquired growing up in Liverpool 8) he secured spots on BBC 6 Music and his ‘Funk And Soul Show’ quickly became one of that station’s most listened to programmes. That success prompted live gigs throughout clubland, and his shows were always sell out affairs. That in turn prompted his curatorship of a series of best-selling compilation albums (‘The Craig Charles Funk & Soul Club’) in tandem with the Record Kicks label. If my memory’s correct, I think there were six or seven of them!

Last year CC came back with a new compilation but because it was on a different label, it was branded ‘THE CRAIG CHARLES TRUNK OF FUNK’. The name was different but the concept was the same – a handpicked selection of soul and funk  gems, all hallmarked with that special raw, earthy, organic soul and/or funk flavour that is the Craig’s calling card. The album was optimistically billed as Volume 1 and now this new label, Soul Bank, think the time’s right to hit us with a second volume.

This new “trunk” is a 19 tracker which opens with an exclusive mix of the Allergies’ ‘Move On Baby’ – complete with an intro tailored just for this collection. There are a few more exclusives – like a new mix of Smoove and Turrell’s ‘Slow Down’ and a jazz mix of Mario Biondi’s ‘This Is What You Are’ Yep, we know this has been out before, but right now it’s hard to find.

The oldest track on offer is a classic Northern stomper – Luther Ingram’s 1966 outing ‘All The Same To You Baby’ and amongst the newest are Joel Culpepper’s ‘W.A.R.’ (50 odd years after Ingram, but boasting similar frantic beats!), Joseph Malik’s ‘Mixed Race Combination’ and Acantha Lang’s ‘He Said/She Said’. In between there’s all kinds of everything. Grabbing at your attention are The Bamboos’ cover of ‘Ride On Time’ (fab Kylie Auldist vocal here), The Crow’s psychedelic twister ‘Your Autumn Of Tomorrow’ and Ferry Ultra’s take on ‘Why Did You Do It’. Lob in some funky and bonkers instrumentals (none more bonkers than the Traffic’s take on ‘Beat It’) and you have  a very varied but satisfying collection – your very own Craig Charles show!

‘Trunk Of Funk 2’ is released on November 5th via Soulbank Music. A vinyl release follows in January