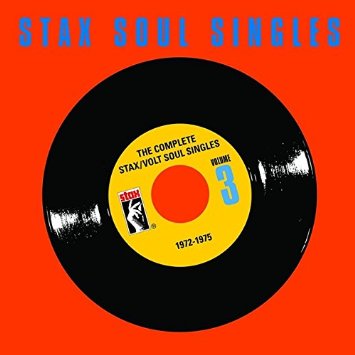 Soul collectors of all hues will be delighted to know that Universal has just reissued two monumental box sets chronicling the history of one of soul’s most iconic and influential labels – Stax. Back in the early 90s three collections were released on the label. They included every Stax single released during the Memphis company’s life span (1959 – 1975). The first volume focused on what has become known as “the Atlantic era”… the period when much Stax material was issued via the then more muscular Atlantic. Volumes 2 and 3 make up the reissued pair, with Volume 1 concentrating on mid-period Stax (1968- 1971) – when the label was getting to call all its own shots -while Volume 3 (our focus here) tracks the singles released during the label’s final years.

Landmark tunes? Well there are so many…. but what about The Dramatics’ ‘In The Rain’, Shirley Brown’s ‘Woman To Woman’ or The Staple Singers’ ‘I’ll Take You There’ for starters. In honesty though the attraction of this collection is stumbling across long forgotten gems – like Little Milton’s ‘Behind Closed Doors’ and songs you hadn’t even heard before … Willie Singleton’s ‘Burning On Both Ends’ anyone?

Sadly Stax went to the wall in 1976. The reasons are complex and this is not the place to re-state them. Rather all we need to say is that the label’s messy end in no way diminishes its importance and status… enjoy a massive part of what created that importance and status here! Volume 2 is also available but, sadly, we understand there are no plans at the moment to reissue Volume 1 – where the licensing rights remain with Atlantic.