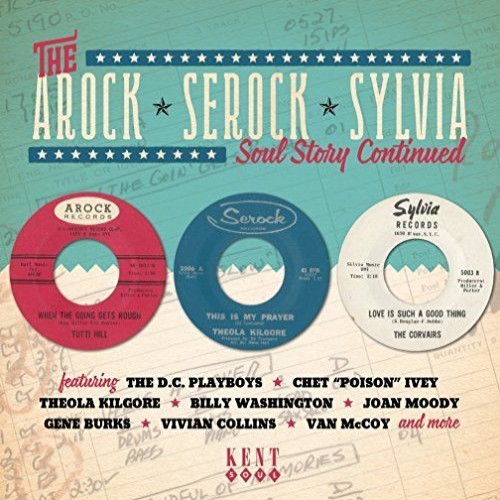 Ace/Kent’s latest compilation is their second look at the output of the New York based Arock, Serock and Sylvia labels. The stable was owned by sometime jazz sax man Al Sears who in his day had played with the Duke Ellington Band amongst others. After dabbling in music publishing he started the Gator label in 1960 followed by Triess. Neither had much success and in ’62 he launched Serock, which was distributed by Scepter. After complex financing and legal wrangling, Sercok folded in 1963 and Sears then tried again with Arock which itself was superseded by Sylvia. Sylvia lasted till mid 1966 after which Sears went to work for Ray Charles’ Tangerine Records. He resurrected Sylvia in 1972 but again success was limited.

Here Kent reassembles a generous 25 tracks from Sears’ empire and they once again show that quality (especially with black music in 60s America) didn’t always lead to success… a myriad other considerations always came into play, amongst them luck and what connections you had with those who controlled the airwaves.

Whatever was required came to together for Al Sears when he licensed a Los Angeles production from Ed Townsend called ‘The Love Of My Man’. Credited to Theola Kilgore, the dramatic cut rose to #3 on the R&B chart. It’s not included here; instead we get the follow up – the equally dramatic ‘This Is My Prayer’ (here in its rarer long version), which, sadly, failed to chart.

Other recognizable names on the album include Van McCoy, Don Covay and Marie Knight. The McCoy track is ‘It Ain’t No Big Thing’. From 1964, it comes from a time when Van harboured performing ambitions and anoraks will be delighted to know that the BVs on the track come from Cissy Houston and Dee Dee Warwick. The Covay cut is a previously unissued demo from 1962 called ‘Did You Hear’ while the Marie Knight track is another demo … ‘Nothing In The World’ which she eventually recorded for Okeh.

Soul collectors might also recognize names like The Diplomats, The DC Playboys and The Larks but in the main the artists are drawn from that vast legion of 60s wannabees. We’re liking the two cuts from a lady called Joan Moody. The Ace/Kent team can’t find anything about her… not even a publicity picture! But her two cuts on this album are quirky and have a very particular attraction. Both ‘I Can’t Stay Away’ and ‘Music To My Ears’ have that lovely 60s Chicago brassy backing while Ms Moody’s voice (though not the most soulful) has the same reedy timbre as Diana Ross’. An odd mix, but it works.

The ‘The Arock, Serock, Sylvia Story Continued’ is out now.